Man with the Pointed Toes Tom is a shy, backward Texan who is unschooled in the ways of love. He also happens to have more money than a hound dog has fleas. Enter the gold-digging debutante bent on stealing Tom's heart...and all that dough. Can Tom wise up in time to see through her scheming ways? Back by popular demand from Plaza's very first 2006 production, this heartwarming comedy is a Texas love story with a drawl.

By Lynn and Helen Root
Directed by Stefanie Glenn 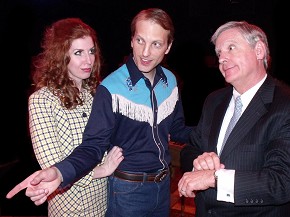 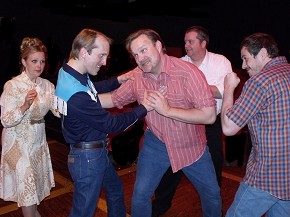 is returning to the Plaza stage for the third time - let’s hope he finally gets it right. He was in Plaza’s inaugural production of this same show in 2006, and will try to remember to not show up at the old Putt-Putt on opening night. He also had the privilege of sharing the role of Radames with castmate Kyle Adams in Plaza's award winning AIDA in 2009. He’s a bit overwhelmed by sharing the stage with such a talented and truly great group of castmates. He's sorry to any of them that he actually punches during the run. As always, thanks to director Stef, and to his favorite theater producers in the world. Much love to the beautiful people he lives with and who let him do this theater thing - wife Shoshana and daughter Cosette - and Happy New Year!
More info

You have probably seen Tina "behind-the-counter" here at Plaza, but it's a rare occasion she gets to get onstage. Well, "Toes" is a show Tina has always loved and she's grateful for the chance to play in this show with such a great director and cast. Other roles you might remember Tina from include Lena Lamont in SINGIN' IN THE RAIN, Fairy Mae in THE CURIOUS SAVAGE and Essie in YOU CAN'T TAKE IT WITH YOU. Tina is also the proud mother of six amazing kids, the most recent being 6 month old son JJ. In her spare time, Tina makes costumes, costumes and more costumes and she LOVES it. Tina was also honored to be a recipient of two 2009 Column Awards - the first as Costumer of Plaza Theatre Company's 2008 production of AIDA and the second as Co-Director of AIDA with husband JaceSon.
More info

Kevin is excited to be back ON the stage! His last production was as director of the Plaza Theatre Company comedy OVER THE RIVER AND THROUGH THE WOODS. Favorite Plaza roles include Uncle George (CASH ON DELIVERY) and Zoser (AIDA). Other directing credits include NUPTIALS, DON’T DRINK THE WATER, THE FOREIGNER, and ARSENIC AND OLD LACE. By day, he works with special needs kids and is pursuing his teaching certification in Special Education. First and foremost, thanks go to his wife Vanessa and son, Elijah, who steadfastly remain the “best reasons I know for being me.” Without them, life would be meaningless. He is also grateful to share the stage with such an incredibly talented group of performers. Thanks also go to the Barrus/Siler families for just being them.
More info

This is Luke's 5th show at PTC, having previously appeared as Eric Swan in CASH ON DELIVERY, Frank Gilbreath, Sr. in CHEAPER BY THE DOZEN, and most recently as Charles Dickens/Fred in A CHRISTMAS CAROL. He has performed locally with Carnegie as well, playing Aslan in LION...WARDROBE, Thomas Jefferson in 1776, and Count Dracula in DRACULA. He is the Theatre Arts teacher at Alvarado Junior High School, and co-owner of Dance Across Cleburne with his wife, Rachel. Luke is happy to be sharing the stage with such a talented cast and is grateful for the opportunity to appear in another PlazaCo production.
More info

was most recently seen in INTO THE WOODS as Rapuzel's Prince. Other favorite roles on the Plaza stage include Jimmy Smith ( THOROUGHLY MODERN MILLIE), David-Bob in BEAU JEST, Don Lockwood in SINGIN' IN THE RAIN, Radames in AIDA, Clive in SEE HOW THEY RUN, Tom in MAN...POINTED TOES in 2006 and 2007, Curly in OKLAHOMA!, Linus in CHARLIE BROWN, and of course the beloved Mervin Oglethorpe several times over in the SMOKE ON THE MOUNTAIN series. He has enjoyed other roles across the metroplex such as John/Judas (GODSPELL), the Duke (BIG RIVER), and most recently Seymour Krelborn in LITTLE SHOP OF HORRORS at the Repertory Company Theatre of Richardson where he met his beautiful bride. As always, it's his utmost pleasure to spend such quality time with his Plaza family!
More info

is very happy to be back on the Plaza stage for this wonderful show. His past Plaza shows include OVER THE RIVER AND THROUGH THE WOODS as Nick, SMOKE ON THE MOUNTAIN HOMECOMING as Dennis, ALL SHOOK UP as Dean Hyde, THE MUSIC MAN as Jaycee Squires, SINGIN' IN THE RAIN, and AIDA. He would like to thank his family and friends for all their support.
More info

as the 'M' in 'JTAM' Milette has appeared in many productions at Plaza, most recently as Baker's Wife in INTO THE WOODS, Miss Sandra in ALL SHOOK UP, Martha in SECRET GARDEN, Lucy in GOOD MAN...CHARLIE BROWN, Eliza in MY FAIR LADY, and a Follies Girl in WILL ROGERS FOLLIES just to name a few. Milette was most recently seen in the DFW area at OnStage in SUNDAY IN THE PARK WITH GEORGE (Frieda), and then at Fort Worth Opera as a super in DON GIOVANNI. Milette sends big hugs and kisses to her wonderful family!
More info

has been in many productions in Johnson County for PlazaCo and the Carnegie Players. Past appearances at PlazaCo include Wiley Post in THE WILL ROGERS FOLLIES, Harry Archer in KISS AND TELL, Walter Hollinder in DON'T DRINK THE WATER, and Abe Goldman in BEAU JEST. Jay and his beautiful wife Corlis enjoy traveling when they can squeeze in a getaway. An accomplished writer, Jay has published two novels - THE CROSS OF LORRAINE and A LITANY OF ANGELS - which can be checked out at www.crossoflorraine.com.
More info

is thrilled to be back working at Plaza. Stefanie has been a part of several Plaza shows including CASH ON DELIVERY, WILL RODGERS FOLLIES, THROUGHLY MODERN MILLIE, MY FAIR LADY,THE SECRET GARDEN, FOOTLOOSE and AIDA. Favorite shows Stefanie has directed are YOU CAN’T TAKE IT WITH YOU, KISS ME KATE, FORUM, OKLAHOMA, and 42nd STREET. Stefanie holds a Master of Arts from Texas Woman’s University with an emphasis in Directing and Stage Management and a Bachelor of Arts from Harding University with an emphasis in Acting. Special thanks to her family and friends for all their love and support!!
More info