An inventive comic romp, The Foreigner is set in a fishing lodge in rural Georgia and tells the story of a pathologically shy young named Charlie who pretends that he can't speak English in order to avoid making conversation with strangers - the other guests at the fishing lodge. Eventually the other guests decide to air their secrets around Charlie - many damaging revelations made with the thought that Charlie doesn't understand a word being said. That he does fuels the nonstop hilarity of the play and sets up the wildly funny climax in which things go uproariously awry for the "bad guys," and the "good guys" emerge triumphant. 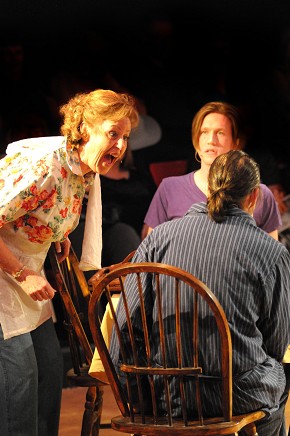 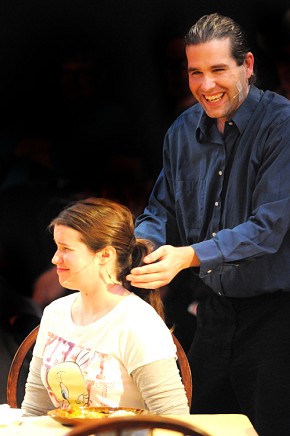 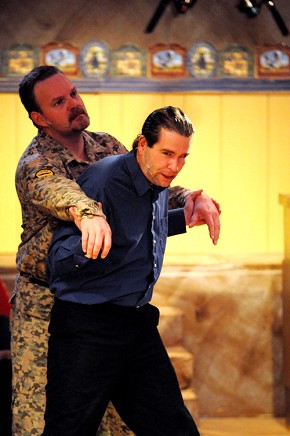 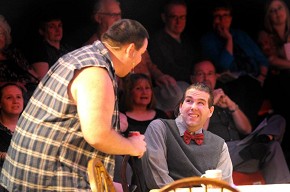 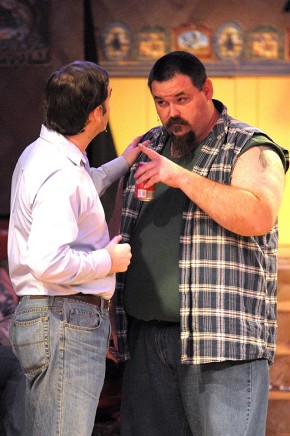 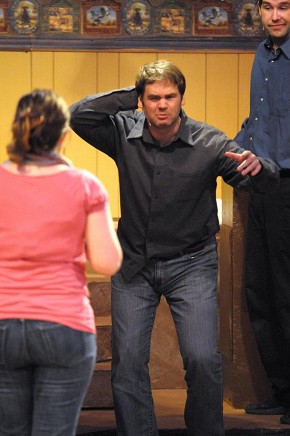 Is thrilled to be making his debut with the Plaza Theater company. He is a actor / writer and drag racing enthusiast. He was Last seen on stage in shows such as: TROGG A MUSICAL, A SAMURAI NOSFERATU, INHERIT THE WIND, CARNIVAL OF SOULS, BOLLYWOOD LYSISTRATA, DARK OF THE MOON, CANNIABAL THE MUSICAL, PLAN 9 FROM OUTER SPACE, CRUSHING GRAIN, EVIL DEAD THE MUSICAL, OTHELLO, TEMPEST, MONTY PYTHON MADNESS, ONE FLEW OVER THE CUCKOO'S NEST, GREATER TUNA, AND JULIUS CAESAR. He as also appeared in film in season 3 of PRISON BREAK, THE GENESIS OF HEALING, and soon to be released, DEALEY PLAZA THE MOVIE.
More info

Trich is thrilled to be back at Plaza with such an amazing cast and crew. She would like to thank the producers of this fine theatre for how hard they work to not only insure that the community sees a good performance, but how hard they work to make sure the actors have a wonderfully safe, exciting and fulfilling environment to perfect their craft. You may have seen Trich performing in theatres all over the metroplex. She was last seen in Carnegie Players's FATHER OF THE BRIDE. Some of her favorite rolls have been, Truvy, STEEL MAGNOLIAS, Maria in LEND ME A TENOR, Emma in OVER THE RIVER AND THROUGH THE WOODS, Nanny in HOLLYWOOD ARMS. Trich is represented by Linda McAlister Talent and has her own production company with fellow diva Cindy Almost called A to Z Girls Productions. She would like to thank this community for all the support for live theatre in Cleburne.
More info

is excited to be part of his first full production at Plaza, having been previously involved with YOU CAN'T TAKE IT WITH YOU. He has been seen around the Metroplex as Mr Darcy in PRIDE AND PREJUDICE, Gooper in CAT ON A HOT TIN ROOF, Trevor Graydon in THOROUGHLY MODERN MILLIE, CK Dexter Haven in PHILADELPHIA STORY, as well as two years of MONTY PYTHON MADNESS. A graduate of West Point and Oxford, he spent several years living and traveling overseas. Although not a native of Texas, he now lives in the DFW area and owns an engineering firm. He happily escapes on to the stage whenever someone lets him.
More info

Jenn first appeared at Plaza as Mary/Ensemble in the 2011 production of ANNIE GET YOUR GUN and she is thrilled to be returning to the Plaza stage in 2012! She was most recently seen as Audrey in THE FARNDALE..MURDER MYSTERY at Pantagleize Theatre in Fort Worth, and as a Pharisee in GODSPELL at Onstage in Bedford. Other favorite roles include Hermia in A MIDSUMMER NIGHT'S DREAM, Woman in DUCK HUNTER SHOOTS ANGEL, and Sarah in CHILDREN OF A LESSER GOD. Jenn holds a B.A. in Theatre Education from Stephen F. Austin State University. When not on stage, she can be found coaching other young performers in her work as a Creative Drama teacher in White Settlement I.S.D. or plotting her next travel adventure. "Thanks to Luke and the Plaza producers for giving me this amazing opportunity, and thank you to ALL my friends and family who've loved and encouraged me along the way!"
More info

THE FOREIGNER will be Michael's first venture into Community Theater as well as his first production with Plaza Theater Company. He is very honored and thrilled to be among such a great cast and crew. Michael has been involved in several college and church productions, spanning over almost 20 years. Some of his more memorable roles have been The Lion in ANDORCLES AND THE LION, Chief Bromden in ONE FLEW OVER THE CUCKOO'S NEST, and Brocker Slade in THE WAKE OF JAMEY FOSTER. He has also received Excellence Awards from Texas Junior College Theater Festival for sound design in CAT ON A HOT TIN ROOF, and as Carlson in OF MICE AND MEN.
More info

is thrilled to be making his debut at Plaza! Jerry was most recently seen as Marc in ART for QLive and in TUNA DOES VEGAS at GLCT. Other credits include DOUBT, THE LARAMIE PROJECT, 25TH ANNUAL...SPELLING BEE, A MIDSUMMER NIGHT'S DREAM, OKLAHOMA, SCAPINO, and HAMLET, all for Theatre TCU. While at school, Jerry also directed FAT PIG. Jerry graduated from TCU with a BFA in Theatre.
More info

Luke is performing in his eleventh production at PlazaCo having previously appeared as Long John Silver in TREASURE ISLAND,  Lank Hawkins in CRAZY FOR YOU, Charles Dickens in A CHRISTMAS CAROL, and Sir Anthony Dewhurst in THE SCARLET PIMPERNEL. He has also appeared locally with the Carnegie Players as Aslan in LION...WARDROBE, Count Dracula in DRACULA, and Thomas Jefferson in 1776. This is the first show he has directed for the Plaza stage. Luke is the theatre teacher at Alvarado Junior High School and is a co-owner of Dance Across Cleburne with his wife, Rachel.
More info

CRYSTAL TODD (Stage Manager) is excited to stage manage at Plaza. She has stage managed at Alvarado High School for SKRIKER, ALICE IN WONDERLAND, and for One-Act Competition, FEMALE TRANSPORT and THE MADWOMAN OF CHAILLOT. She also appeared in ONCE ON THIS ISLAND as Mama Euralie. Crystal is a senior and will attend UT Arlington in the fall majoring in Mathematics. She Is the section leader of the flutes and plays the flute, piccolo, and piano. She plans on continuing music through her entire life. Crystal is blessed to have her talents and opportunities that God has given to her, her parents for their love and support, and friends for laughs and good memories. 1 Timothy 4
More info