Set in 1940s England, the village inhabitants are preparing for Nazi invasion. Resident spinster Miss Skillon becomes convinced that the vicar’s actress wife is up to no good and attempts to catch her out. Add an escaped Russian prisoner of war, a handsome actor, the visiting Bishop of Lax and some meddling neighbors and mirthful confusion and mayhem result. 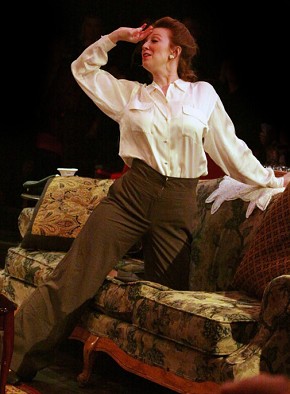 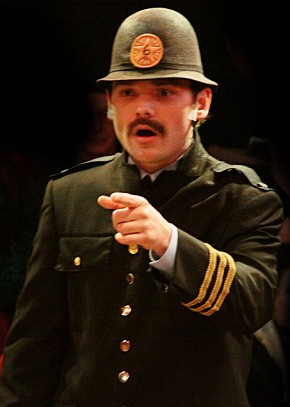 Erica Maroney is thrilled to be making her Plaza stage debut in this production. Previous onstage work include productions at Theatre Three, Dallas Theatre Center, Theatre Britain, and new play readings for PLAYMARKET festival at 37 ARTS (NYC) and Rattlestick Playwright’s Theater (NYC). Her favorite performance was sharing the stage with SEE HOW THEY RUN’s director, Ben Phillips in EDUCATING RITA. She would like to thank the producers at Plaza, Ben, and her fellow cast members for a wonderful experience and to her husband Dillon for his unwavering love and support.
More info

Milette is honored to be a part of one of her favorite comedies. She was most recently seen as The Chaperone in THE DROWSY CHAPERONE and Irene Roth in CRAZY FOR YOU. Other favorite roles include Frieda in Onstage in Bedford's SUNDAY IN THE PARK WITH GEORGE, and Pamela in MAN...TOES and the Baker's Wife in INTO THE WOODS, both here at Plaza. Milette is also a founding Producer here at Plaza, along with her husband Aaron and partners Jaceson and TIna Barrus. When she isn't working at Plaza, she is also a full time student studying Nutrition Science. Currently at Hill College, she plans to transfer to TCU in the fall to pursue her degree. Milette's most important and rewarding project is the honor of being mom to Dana, Ryan, and Mitch, who constantly roll their eyes at their mom's antics even though they secretly love it. Thanks to her awesome double, Stacy, and her director Ben for trusting her with the part. May all your Harvest Festivals be bountiful!
More info

Stacey is excited to be returning to the Plaza stage as Miss Skillon in this fun and fast paced show. you may remember her from HELLO, DOLLY, CHEAPER BY THE DOZEN, or even as The Voice of The Giant in INTO THE WOODS. Stacey has a BFA in theater performance from UT Arlington. Some of her favorite roles include Sheila in SORRY, WRONG CHIMNEY! and Ms. Potter in TOM, DICK, AND HARRY. She keeps herself busy running a small internet shop and chasing after her wild and rambunctious boyos. "Thanks to my husband and sweet boyos for all of the support and snuggles!"
More info

Robert is is a actor / writer and drag racing enthusiast and he is thrilled to be returning to the Plaza stage after having such a blast in THE FOREIGNER Last year. He was Last seen on stage in shows such as, HARVEY, SWEENEY TODD, RAFT OF THE MEDUSA, TWELFTH NIGHT, TROGG A MUSICAL, A SAMURAI NOSFERATU, INHERIT THE WIND, CARNIVAL OF SOULS, BOLLYWOOD LYSISTRATA, DARK OF THE MOON, CANNIABAL THE MUSICAL, PLAN 9 FROM OUTER SPACE, CRUSHING GRAIN, EVIL DEAD THE MUSICAL, OTHELLO, TEMPEST, MONTY PYTHON MADNESS, ONE FLEW OVER THE CUCKOO'S NEST, GREATER TUNA, AND JULIUS CAESAR. He as also appeared in film in season 3 of PRISON BREAK, THE GENESIS OF HEALING, and, DEALEY PLAZA THE MOVIE
More info

Joy Millard is very pleased to be doing her first show with Plaza Theatre Company. Prior to moving to the DFW area, she enjoyed performing in shows at the Point Theatre in Ingram, Texas, where she played Gertie in OKLAHOMA! and the Nurse in SUNSHINE BOYS. She is a recent graduate from Texas Wesleyan University where she played Lenny in CRIMES OF THE HEART and The Young Wife in LA RONDE, among others. Since graduation, Joy has been active in the Dallas/ Fort Worth theatre community, directing and acting. Joy played a Nurse in SOUTH PACIFIC with Garland Summer Musicals and was a soloist in the musical revue SOME ENCHANTED EVENING. She also assistant directed with Denton Community Theatre for ALL MY SONS, with Allen's Community Theatre for OVER THE RIVER AND THROUGH THE WOODS, and just finished directing THE LITTLEST WISEMAN at the Scott Theatre. She would like to thank her family and boyfriend for their never-ending support.
More info

David Goza has been Teaching and Directing shows at Burleson High School and is excited to be making his return to acting and doing it at Plaza. Previous work includes Technical design and work on BEAUTY AND THE BEAST, HELLY DOLLY!, GODSPELL, and BLITHE SPIRIT. His favorite show to date is HAMLET, where he got his first taste of stage combat and Shakespearean acting. He would like to thank Plaza for the opportunity to act again, his fellow cast members, and Ben for making this experience as amazing as it has been.
More info

KEVIN POOLE (The Intruder) Kevin is beside himself to be back on the Plaza stage after a year’s absence. (He’s the tall one on the left.) He was last seen as Burl Sanders in SMOKE ON THE MOUNTAIN and before that as Link in THE MAN WITH THE POINTED TOES. Heartfelt thanks go to my wife Vanessa and son Elijah for their support in letting me have this time on stage. I certainly hope everyone enjoys the show and may 2013 be a fantastic year for you all…"Tovarich!!"
More info

STEVEN LINDSAY
(The Bishop of Lax)

You may have seen this award winning actor/director as Scrooge in our last production of A Christmas Carol. As an actor some of the roles he has enjoyed are: Charlie Baker in THE FOREIGNER, Sir Evelyn Oakley in ANYTHING GOES, Aegeon in THE COMEDY OF ERRORS, Maurice in BEAUTY AND THE BEAST, Touchstone in AS YOU LIKE IT, Nick Cristano in OVER THE RIVER, Bobby Franklyn in RUN FOR YOUR WIFE, Master Ford in THE MERRY WIVES OF WINDSOR, Volpone in VOLPONE, Joe Keller in ALL MY SONS, Paravicini in THE MOUSETRAP, and more. Steven has directed: THE IMPORTANCE OF BEING EARNEST, TAMING OF THE SHREW, MISTRESS OF THE INN, THE CURIOUS SAVAGE, DEARLY DEPARTED, ON GOLDEN POND, SHADOW BOX, YOU KNOW I CAN’T HEAR YOU WHEN THE WATER’S RUNNING, PYGMALION, ANGEL STREET, DIAL “M” FOR MURDER, and many more. He also does film and print when he has time. Steven holds a BS in Dramatic Production from Bob Jones University and studied Shakespeare with Chris Pickles of the Royal National Theatre.
More info

Aaron is one of the four founding producers of Plaza Theatre Company and has performed in many different shows here such as Tevye in FIDDLER ON THE ROOF, Nicely Nicely Johnson in GUYS AND DOLLS, Horton in SEUSSICAL, Charlie Brown in GOOD MAN...CHARLIE BROWN, Bufflo Bill in ANNIE GET YOUR GUN, and many more. Past Plaza directing credits include the recent critical hit RAGTIME (which he directed with his lovely wife Milette), ARSENIC AND OLD LACE, HARVEY, SEUSSICAL, INTO THE WOODS, and TREASURE ISLAND where he won BEST DIRECTOR in 2012 The Column Awards. Aaron has also won multiple Column Awards for Best Scenic Design, and Best Sound Design, and the Rudy Seppy Volunteer Award. Aaron is a proud father of three wonderful kids and husband to Milette..
More info

This is John's fourth production here at PlazaCo. He would like to thank JTAM, his parents (Jay and Shauna) for all their encouragement and support. Some of his favorite previous performances include Carnegie Player's CAMELOT, OLIVER, LIL ABNER, and PAINT YOUR WAGON. "I play real sports, not trying to be the best at exercising."
More info

Cessany is thrilled to be here for her 10th show at Plaza! She received her degree in Theatre and Music from Ouachita Baptist University and was a member of the school's chapter of Theta Alpha Phi national honors theatre fraternity. Her previous shows to manage/assistant manage include A CHRISTMAS CAROL, FOOTLOOSE,GUYS AND DOLLS, THE DRWOSY CHAPERONE, FIDDLER ON THE ROOF,JOSEPH...DREAMCOAT, DON GIOVANNI, YOU HAVE TO SERVE SOMEBODY, ALL SHOOK UP, SEUSSICAL, and SIX CHARACTERS IN SEARCH OF AN AUTHOR. She has been seen on stage here at Plaza in RAGTIME and CRAZY FOR YOU. Cessany would like to thank Drew and Jojo for being awesome and putting up with all of her crazy.
More info

Jesica Valadez is pleased to have been involved in SEE HOW THEY RUN at Plaza. She is a theatre major at Texas Wesleyan University where she stage managed MACBETH, CRIMES OF THE HEART, and CERTIFICATE OF DEATH. She also prop designed THE PILLOWMAN, THE LARAMIE PROJECT, A MAN FOR ALL SEASONS, Light designed LYCANTHROPE, and sound designed THE 25TH ANNUAL PUTNAM COUNTY SPELLING BEE at Theatre Wesleyan. She would like to thank Ben for involving her in this production, the cast for being friendly, and Joy for driving her to Plaza and buying her food every night. "BREAK A LEG EVERYONE!"
More info

Ben Phillips is very pleased to be directing at Plaza again, having just helmed a well-received production of ARSENIC AND OLD LACE for the theatre in the fall. Ben has also worked onstage at Plaza as Nathan Detroit in GUYS AND DOLLS, Aldolpho in THE DROWSY CHAPERONE, Citizen Chauvelin in THE SCARLET PIMPERNEL, and the Baker in INTO THE WOODS (2011 Column Award winner). Other past roles include Rooster in ANNIE, Col. McKean in 1776, Harry in COMPANY, Lloyd Dallas in NOISES OFF!, Major Powell in CORPSE!, Hysterium in A FUNNY THING ... FORUM, Frank in EDUCATING RITA, and Sweeney Todd in SWEENEY TODD. Ben's voice can be heard in such animated series as LEGEND OF THE LEGENDARY HEROES, MURDER PRINCESS, FULLMETAL ALCHEMIST: BROTHERHOOD, HEROIC AGE, and ONE PIECE from FUNimation Entertainment. Much gratitude to my producers for their trust and confidence, my production team for their vision and patience, and to my cast for their hard work and dedication. Now, all of you, make me look good!
More info