Hunter and Jeff, race against a deadline to enter an original musical into a theatre festival. Eventually Jeff suggests they write about what to write about and they make a pact to write until the festival deadline and dream about how the show will change their lives. One of Broadway's most original musicals, [title of show] depicts their journey as they write a musical about writing a musical.

Music and Lyrics by Jeff Bowen
Book by Hunter Bell

Please note - The "Apropos" (or clean version) has been modified from the original by the authors for general audiences. 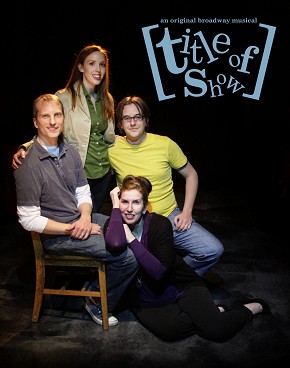 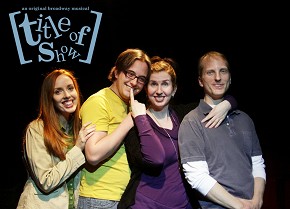 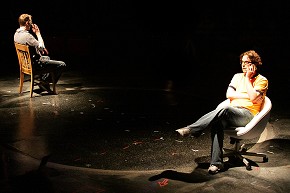 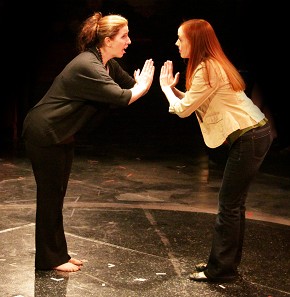 Previously seen at Plaza as Dickens/Fred in A CHRISTMAS CAROL, Younger Brother in RAGTIME, Robert Martin in THE DROWSY CHAPERONE, Bobby in CRAZY for YOU, Rev. Oglethorpe in SMOKE ON THE MOUNTAIN, Joseph in JOSEPH...DREAMCOAT, Cornelius in HELLO DOLLY, Tommy in ANNIE GET YOUR GUN, and Ozzy in THE SCARLET PIMPERNEL. Past favorite roles include: Huck in BIG RIVER, Freddy in MY FAIR LADY, Charlie in GOOD MAN...CHARLIE BROWN, Dickon in SECRET GARDEN, Barnaby in HELLO DOLLY, Barrett in TITANIC, Man 1 in SONGS FOR A NEW WORLD, Younger Brother in RAGTIME, Gary/Roger in NOISES OFF, Happy in DEATH OF A SALESMAN, Laurie in LITTLE WOMEN, John the Baptist/Judas in GODSPELL, Armand in THE SCARLET PIMPERNEL, and Bob Cratchit in A CHRISTMAS CAROL. "Thanks Mom, Dad, "A" and little "P" (yes, i just thanked my dog) for putting up with my sometimes crazy schedule."
More info

is excited to be returning to the Plaza stage for the 5th time. Plaza patrons may have seen him take his shirt off in AIDA, as Radames, or perhaps they saw him when he took his shirt off in MAN WITH THE POINTED TOES, as Tom. He has also taken to the Plaza stage in more shirted roles, such as Percy in THE SCARLET PIMPERNEL. When not performing at Plaza, he has taken the stage in several other theaters in the DFW area. Most recently he was seen (fully dressed) in Lyric Stage's 1776 as Judge James Wilson. When not on the stage, he is almost always wearing a shirt as he practices law in an effort to support his beautiful wife Shoshana and his adorable kid, Cosette. Much love to this incredible cast he gets to play with almost daily, and to Aaron for allowing him to perform this awesome role. If you've read this far, you are probably wondering if this will be a "shirt on" role, or a "shirt off" role - sorry, you'll just have to watch to find out.
More info

MILETTE SILER (SUSAN) Is it curtain time yet? Milette is super pumped to be here. No, seriously. She was most recently seen as Miss Skillon in SEE HOW THEY RUN and as The Chaperone in THE DROWSY CHAPERONE. Other favorite roles include Frieda in Onstage in Bedford's SUNDAY IN THE PARK WITH GEORGE, and Pamela in MAN...TOES and the Baker's Wife in INTO THE WOODS, both here at Plaza. Milette is also a founding Producer here at Plaza, along with her husband Aaron and partners Jaceson and TIna Barrus. When she isn't working at Plaza, she is also a full time student studying Nutrition Science. Currently at Hill College, she plans to transfer to TCU in the fall to pursue her degree. Milette's most important and rewarding project is the honor of being mom to Dana, Ryan, and Mitch, who constantly roll their eyes at their mom's antics even though they secretly love it. Woohoo! Let's do this!
More info

Caitlan Leblo is excited to return to the Plaza stage after a year of moving around and getting married! Some of her favorite shows at Plaza include, JOSEPH…DREAMCOAT, CRAZY FOR YOU, and THE DROWSY CHAPERONE. Most recently, she enjoyed playing Marmee in LITTLE WOMEN at Granbury Theatre Co. She was a member of Kids Who Care for 5 years and performed with them at Disney World and off - Broadway. Caitlan graduated from TCU with a Bachelor's degree in education. She sang with the TCU Concert Chorale and performed with them at Carnegie Hall in New York City. She would like to thank her husband, and family, for all their love and support over the years.
More info

Daron is thrilled that her 24th Plaza show is one she loves so much! Most recently she performed as Jo in LITTLE WOMEN (Granbury Theatre Company) and will soon be playing Eileen in TOO MANY GIRLS (Lyric Stage). Some favorite roles at Plaza include Mother in RAGTIME, Janet in THE DROWSY CHAPERONE, Cinderella in INTO THE WOODS, Annie Oakley in ANNIE GET YOUR GUN (Best Actress Column Award), Natalie in ALL SHOOK UP, Eliza in MY FAIR LADY, Martha in SECRET GARDEN and Gertrude in SEUSSICAL. A graduate of Texas Christian University, she uses her Ad/Pr degree during the day before heading to the theatre. She hopes you enjoy this show as much as she does, and that you find your own "way back to then". :)
More info

Diane is thrilled to be working on [TITLE OF SHOW]. She has enjoyed working with this very talented cast and the outstanding director, Aaron Siler. Diane has been the musical director/pianist for NUNSENSE, YOUR'E A GOOD MAN CHARLIE BROWN and NUNSENSE II, all performed with Greater Cleburne Carnegie Players. She is also a piano teacher and several of her students have been cast members in many of Plaza and Carnegie's shows.
More info

Lindsay is ecstatic to be working on her second production here at PlazaCo. She has stage managed several shows before, some of her favorites include RAGTIME, WEST SIDE STORY, SWING!, CAMELOT, PROPOSALS, JOSEPH.....DREAMCOAT, BIG RIVER and TO KILL A MOCKINGBIRD. Lindsay is the recipient of two Column Awards; 2010 Stage Manager of a Play Non-Equity; TO KILL A MOCKINGBIRD and 2011 Best Stage Manager Non-Equity. She is nominated again this year for Best Stage Manager. Lindsay would like to thank Aaron for letting her be a part of this production, she is happy to be here at PlazaCo working with the fabulous cast and of [TITLE OF SHOW]. Thanks to JTAM for allowing her to be part of the PlazaCo family! Last but not least, "Mom, I love you thank you for always giving me support through all of life's trials and tribulations." Philippians 4:13
More info

is one of the four founding producers of Plaza Theatre Company and has performed in many different shows here such as Tevye in FIDDLER ON THE ROOF, Nicely Nicely Johnson in GUYS AND DOLLS, Horton in SEUSSICAL, Charlie Brown in GOOD MAN...CHARLIE BROWN, Bufflo Bill in ANNIE GET YOUR GUN, and many more. Past Plaza directing credits include the critical hit RAGTIME (which he directed with his lovely wife Milette), ARSENIC AND OLD LACE, HARVEY, SEUSSICAL, INTO THE WOODS, and TREASURE ISLAND. Aaron has also won multiple Column Awards including Best Director for TREASURE ISLAND and RAGTIME, Best Actor in a Musical for Tevye in FIDDLER ON THE ROOF and several others for Best Scenic and Sound Design. He also was awarded the Rudy Seppy Volunteer Award. Aaron is a proud father of three wonderful kids and husband to Milette..
More info