Steel Magnolias serves up a slice of life in Louisiana that's as warm and comforting as sweet potato pie. In the haven of Truvy's beauty salon, six very different women come together to share their secrets and bare their souls, throwing in a little neighborly gossip for good measure. From weddings to divorces, babies to funerals, new beginnings to happy endings, they weather every event in their lives en masse with grace, determination, and perfectly coiffed hair. 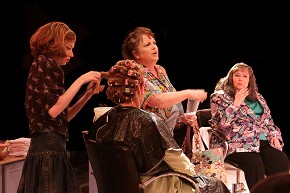 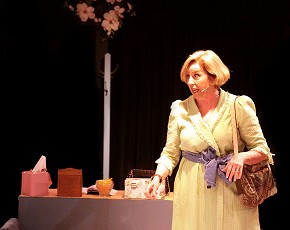 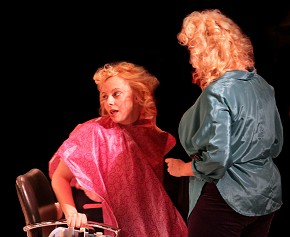 Angela grew up in West, TX and has been living in Granbury for the past 11 years. She has been apart of the Granbury Theatre Company for many years. You may know her from some of her most memorable roles such as "The Buttler Did It" as Haversham/Mable Dupre, "Barefoot in the Park" as Cori Bratter, "Steel Magnolias" as Truvy/Annelle,"The Foreigner" as Catherine Simms,"Fiddler on the Roof" as Shaindel, "All Shook Up" chorus, "A Christmas Carol" as Fred's Wife, and most recently her first appearance on the Plaza stage as one of the Kings Wives in "The King and I". Angela is a former Collegiate National Dance Champion/Choreographer and this fall will be her second season teaching Jazz/Hip Hop classes at the Plaza Theatre Academy. She is also a loving mother of two wonderful children and sends her love out to her family for all their support. Angela would also like to thank her director Taffy, the Plaza Producers, and Crew for their hard work and the opportunity to be apart of the Plaza Th
More info

Brianna is excited to be a part of her first Plaza production. She has performed throughout the area in various productions, some of her favorite shows include JOSEPH...DREAMCOAT, Bombalurina in CATS, Cinderella in CINDERELLA, Sopespian in PRINCE CASPIAN, The Queen of Hearts in ALICE IN WONDERLAND, and THE LION... WARDROBE. Brianna is a makeup artist and graduated from cosmetology school at Toni and Guy Hairdressing Academy. "A special thanks to Taffy for yet another wonderful opportunity to be a part of the show, the love and support from friends and family, and God making all things possible again."
More info

Kate is very excited to be performing in her first show at Plaza. She was bitten by the theatre bug early in life when she played "the farmers wife" in kindergarten! All thru her school years she was very involved in as many shows as possible. When she and her family moved to Cleburne she became involved with Carnegie Players both as an actress and director. Some of her roles there include, Susie in WAIT UNTIL DARK, Auntie Em in WIZARD OF OZ, Norma in THE DIVINERS and Lady Capulet in ROMEO AND JULIET. Carnegie was where she first played Clairee along with Shauna Lewis in her first time as Ouiser. She has directed multiple shows for Carnegie including many of the summer musicals and will be directing PUMP BOYS AND DINETTES this fall. She is active in her church, Calvary Baptist in Cleburne, where she teaches a ladies class. She is presently the Theatre Director for Covenant Classical School in Fort Worth. "Thank you Taffy for the opportunity to portray Clairee once again."
More info

Kristi is delighted to be back on the PlazaCo stage for a third time. She was most recently seen as Linda Swan in CASH ON DELIVERY. Kristi's favorite roles include Sweetheart in EXIT, PURSUED BY A BEAR, Jan in PILLOW TALK, Dawn in LOBBY HERO, and Mollie in THE MOUSETRAP. She holds a B.F.A. in Theatre Education from Midwestern State University. Kristi uses that degree as the Drama Director at Alvarado Junior High. Kristi would like to thank the teachers and directors who molded her into the person she is today.
More info

Trich is delighted to be a part of this cast and crew of extraordinary ladies and our David. As Trich says the "token guy". She would like to thank the wonderful Taffy Geisel for allowing her to be a part of this adventure. STEEL MAGNOLIAS was Trich's first production here at Plaza almost five years ago. Since then Trich feels like she has found a home and you may have seen here at Plaza in several productions including, Betty in the FOREIGNER, Emma in OVER THE RIVER AND THROUGH THE WOODS, Aunt Mary in HAPPIEST MILLIONAIRE and May in BYE, BYE BIRDIE. She was last seen here as Mrs. Graves in ENCHANTED APRIL. Trich works all over the Metroplex and two of her favorite rolls recently was Dotty in NOISES OFF at the Granbury Opera House and Nanny in HOLLYWOOD ARMS at Theatre Arlington. Trich is represented by Linda McAlister Talent. Her biggest "thank you" is to her son Brett and daughter-in-law Nicole for her best audience ever and that is her precious twin granddaughters.
More info

Shauna is happy to be back on the Plaza Stage reprising her role as Ouiser. Past shows as computer tech at Plaza have been HELLO DOLLY, SCARLET PIMPERNEL, RAGTIME, THOROUGHLY MODERN MILLIE, GUYS AND DOLLS, ANNIE GET YOUR GUN, MAN OF LA MANCHA , INTO THE WOODS(Column Award /Stage Management). Onstage at Plaza roles include Grandmother / INTO THE WOODS, Mrs. Fezziwig/ CHRISTMAS CAROL, Emma / OVER THE RIVER, Hooverite/ ANNIE, LuLu Warnicker/ FOOTLOOSE, Pickalittle Lady/MUSIC MAN, Patricia Fodor/CRAZY FOR YOU. Shauna has also been on the Carnegie Stage in Cleburne as the Wicked Witch / WIZARD OF OZ, Mrs. Armstrong/ BEST CHRISTMAS PAGEANT. Shauna holds a MA degree in Speech Communications from Texas Christian University. She currently teaches special education at Smith Middle School in Cleburne. Much appreciation to the producers at Plaza, Taffy G. and my fellow cast mates for their unlimited knowledge of all things theater. Love you Jaybird!
More info

Taffy is tickled pink to get the fun of directing 'Steel Magnolias.' She comes from a long line of strong, scrappy Southern women, and is thankful for the inheritance of their grit. Other shows directed at PlazaCo include DEAR RUTH, THE HAPPIEST MILLIONAIRE, ANNIE, and SINGIN' IN THE RAIN. You may have seen her in KISS AND TELL, or as Miss Myrtle, one of the cranky church ladies in several versions of SMOKE ON THE MOUNTAIN. Other directing gigs include THE DIARY OF ANNE FRANK, ANNE OF GREEN GABLES, A WRINKLE IN TIME, SOUTH PACIFIC, THE LION THE WITCH AND THE WARDROBE, PRINCE CASPIAN, YANKEE DOODLE DANDIES, and many others. "Thanks to Aaron, Milette, JaceSon and Tina for creating such a happy, healthy theater, to this fabulous hard working funny cast for making this such a joyful gig, to husband Howard, and kids Joey, Caroline and Matt - who make getting up each day a joy - and to the Lord, the giver of every good and perfect gift."
More info

Cessany is thrilled to be here for her 13th show at Plaza! She received her degree in Theatre and Music from Ouachita Baptist University and was a member of the school's chapter of Theta Alpha Phi national honors theatre fraternity. Cessany is an alumna of Hogwarts and former captain of the Slytherin house quidditch team. She has stage managed/assistant stage managed over 15 productions and has worked for companies such as San Diego Opera, The Glimmerglass Festival, and Fort Worth Opera. Cessany has been seen on the Plaza Stage in RAGTIME, CRAZY FOR YOU and next up SEUSSICAL! She would like to thank her best friends, Drew and Kyle for their constant support and unending sass. "Laissez les bon temps router!"
More info

We are happy to have Stacey over the costumes for the show. Most of the people in our audience probably remember the 1980s and the styles you will see on the stage tonight. You may remember Stacey in our recent production of CAMELOT. Other shows at Plaza include Earnestina Money in HELLO DOLLY!, Ms. Cowper in the fun farce CASH ON DELIVERY, SEE HOW THEY RUN and CHEAPER BY THE DOZEN. Stacey has also been in THE BEST CHRISTMAS PAGEANT EVER and A MIDSUMMER NIGHTS DREAM with the Carnegie Players. Stacey has a BFA in Theatre Performance from UT Arlington and enjoys knitting, sewing, reading, and showing off her slick dance moves in aisles of grocery stores. "Thanks to R, Li, and O for your hugs and awesomeness."
More info

is thrilled serve as Plaza's Properties Manager, also known as "Prop Momma". Over the years, she has enjoyed serving the Lord with her music and artistic gifts through a variety of church music ministries, homeschool associations and community theaters. She truly enjoys designing each prop and set decoration to match the era of each production as well as to meet the vision in her director's brain. Tammie would like to thank her family for their support and Taffy for always being such a joy to work with! She strives to daily live out Colossians 3:23-24 "Whatever you do, work at it with all your heart, as working for the Lord, not for human masters, since you know that you will receive an inheritance from the Lord as a reward. It is the Lord Christ you are serving."
More info