Sarah is a nice Jewish girl with a problem: her parents want her married to a nice Jewish boy. She tells them she is dating a Jewish doctor and they insist on meeting him. When Sarah plans a dinner party she employs an escort service to send her a Jewish date to be the fictitious Dr. Steinberg. Instead, they send Bob Schroeder, an aspiring actor who agrees to perform the impersonation. Will he be able to fool her parents? 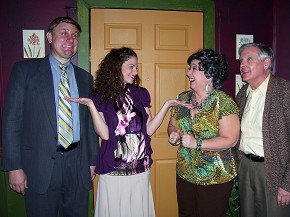 Theresa is thrilled to be performing alongside an amazing cast in her second Plaza Theatre show! She recently made her Plaza debut as Susan in DON'T DRINK THE WATER. Some of her favorite roles include Puck in A MIDSUMMER NIGHT'S DREAM, Wendy in PETER PAN, M'lynn in STEEL MAGNOLIAS, and Harriet in THE MAN WHO CAME TO DINNER. She would like to thank her beautiful family and friends for supporting her in living her dream. "Love you guys!"
More info

Camille is excited to return to Plaza Theatre Co as Sarah in BEAU JEST. She was last seen as Zelda in SINGING IN THE RAIN. Some of Camille's favorite PlazaCo roles include Ms. Darbus in HIGH SCHOOL MUSICAL, Florence in CURIOUS SAVAGE, Babette in BEAUTY AND THE BEAST, and Ado Annie in OKLAHOMA. Camille's favorite roles have been Sabrina in SABRINIA FAIR, Sylvia in SYLVIA, Maggie in LEND ME A TENOR, and DIsciple in GODSPELL.
More info

Luke Hunt is a Theatre Arts and Creative Writing teacher at Alvarado Junior High School. He has appeared once before at Plaza as Eric in CASH ON DELIVERY. He has also worked locally with the Carnegie Players as Maurice in BEAUTY AND THE BEAST, Aslan in THE LION, THE WITCH, AND THE WARDROBE, C.C. Showers in THE DIVINERS, and directing THE MOUSTRAP and A MIDSUMMER NIGHT'S DREAM. Luke has a B.A. in Theatre Arts from California State University San Bernardino. He would like to thank his wife and kids for their support in allowing him to spend so much time doing theatre and Aaron for giving him the chance to work with wonderful cast.
More info

Kyle is glad to be, once again, at his home away from home. 2009 has been a big year for Kyle, playing such dream roles as Don Lockwood, SINGIN' IN THE RAIN and Seymour in LITTLE SHOP OF HORRORS at Repertory Company Theatre. Dave-Bob is another long-time dream role and he is excited to be in this talented cast! Other favorite roles include Radames, AIDA, Clive, SEE HOW THEY RUN, and Tom, MAN WITH THE POINTED TOES, all right here on the Plaza stage. Kyle is a software engineer by day who spends most of his free time at the theater, and hopes to one day get into film work, whether in front of or behind the camera, or simply dabbling in anything artistic of interest so someday he can say, "trust me, I used to do this for a living!"
More info

JaceSon is thrilled to once again be playing for Cleburne audiences at Plaza Theatre and can't wait for y'all to see this wonderful show. JaceSon and his wife Tina have co-directed over 20 productions in northern Texas and make up 2 of Plaza's 4 Producers having been producing live theatre in Cleburne since the fall of 2006. JaceSon has performed in many productions and some of his favorites include Will Parker in OKLAHOMA!, Pharaoh in JOSEPH AND THE AMAZING TECHNICOLOR DREAMCOAT and Jacob Marley in A CHRISTMAS CAROL. He has been married to Tina for 17 years and together they are the proud parents of five wonderful children - Tabitha, Parker, Cameron, Eden Grace and Miranda. In his spare time Jace loves classic movies and studying Civil War trivia. He is grateful to be part of such a great cast under such a great director.
More info

This is J. Aaron Lett's 11th production at Plaza Theatre Company. He was last see on the Plaza stage as Ewart Dunlap in THE MUSIC MAN. Recently he played The Barber at OnStage in Bedford's MAN OF LA MANCHA. Recently at Plaza he has been Cosmo Brown in SINGIN' IN THE RAIN and Eric Swan in CASH ON DELIVERY. His favorite productions he has been in include: 1776, MAN OF LA MANCHA, BRIGADOON, INTO THE WOODS, 12TH NIGHT, and THE RAINMAKER. During the day J. Aaron is a Wed Developer for National Direct Media and sometimes a tap instructor for Frances Lea Dance Studio in Burleson/Crowley. Between heart attacks and coronary stent insertions, J. Aaron enjoys having his very soul eviscerated from his corporeal essence, or as others call it, "dating..."
More info

has recovered nicely from her bump on the head during Singing in the Rain and is back for more on the Plaza Stage. Previous roles at Plaza include Janet in KISS AND TELL, Vera in SMOKE ON THE MOUNTAIN, Abby Brewster in ARSENIC AND OLD LACE, Miss Skillon in SEE HOW THEY RUN, Verna in GHOST OF A CHANCE, and Vi in FOOTLOOSE. Other favorite rolls: Miss Hannigan (ANNIE), Golde (FIDDLER ON THE ROOF), Aunt Eller (OKLAHOMA) and multiple whacky characters in LUCKY STIFF. Past experience includes director, choreographer, studio vocalist, vocal coach, percussionist and live sound engineer. Darcy enjoys serving as vocalist, percussionist and drama leader at her church, and works her day job in the financial planning arena. She would like too thank the Lord for allowing her to use her gifts and talents along side such great people at Plaza. Thanks JaceSon, Aaron, Tina & Milette: I love you guys. It’s an honor to be a part of your dream and the Cleburne Community!
More info

Jay is delighted to be appearing in his fourth Plaza show. He has been busy this summer and fall appearing in the for shows. First he played Cogsworth in the Carnegie Players production of DISNEY's BEAUTY AND THE BEAST. Then he appeared as Walter Hollender in PTC's DON'T DRINK THE WATER while preparing to play Nick Bottom in Carnegie's production of William Shakespeare's A MIDSUMMER NIGHT'S DREAM. Jay is truly honored to be playing opposite some of Johnson County's finest and most popular actors in this comedy that has a truly warm human side. Jay wants to thank Corlis for all her love and devotion in allowing Jay to participate in his most favorite of his many avocations. I love you, Baby. Let’s eat!
More info