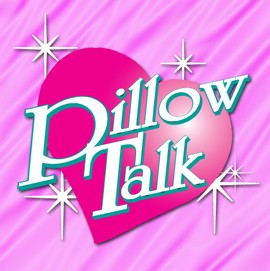 Forced to share a party line with her neighbor Brad, Jan desperately breaks in on one of his many romantic conversations only to have him accuse her of snooping. When Brad meets Jan, he pretends to be a naive Texan named Rex Stetson, and Jan is entranced. This confusion provides the merry play on which the charming film starring Rock Hudson / Doris Day is based.

by Stanley Shapiro and Maurice Richlin

Joy is excited to be back on stage after taking a 3 year break to have her 2 and half year old son, Ryder. She was last seen in Plaza's Cash on Delivery and Don't Drink the Water. She has also worked with Carnegie players and UTA productions while she studied her theater degree there. She is so blessed to have this chance to play the part of Jan.
More info

Kristi Mills is proud to make her Plaza Co debut with this wonderful cast and crew. Her favorite roles include, Dawn in LOBBY HERO, Nurse in ROMEO AND JULIET, Mollie in THE MOUSETRAP and Louise in BANDERSNATCH. Kristi is a senior Theatre Education Major at Midwestern State University in Wichita Falls. She is excited to share the stage with her friend, mentor, and previous theatre teacher, JoAnn Gracey. Kristi would like to thank her marvelous friends, family, and amazing teachers for all their wonderful support.
More info

David is quite excited to doing his second show here at Plaza! He was previously seen as Clive in SEE HOW THEY RUN. David firmly believes that he was the Big Lebowski and Cleopatra in a past life, and wishing to keep with the royalty theme in is current life he wishes to eventually take his place as the prettiest princess in all of the land. His favorite part of doing shows at Plaza is working with his fabulous Stage Manager, Cessany. She is smart, funny, and has a knack for writing witty bios. He wants to thank the 4 wonderful producers for allowing him the opportunity to be a part of this amazing cast.
More info

This is Michael's 9th show with Plaza Theatre, although his first in about two years. He is very excited to be cast in the part of Jonathan Forbes. Michael's favorite roles include Mr. Wilson in HARVEY, Charles Dickens/Fred in A CHRISTMAS CAROL, and Mr. Forbright in CASH ON DELIVERY all at PlazaCo. Michael is an English teacher in FWISD. His passions inlcude the works of William Shakespeare, NHL hockey, and War Between the States History. Michael would like to send lots of love to his beautiful wife, Aimee, and the kiddos: Rylee, Jake, and Aubrie. Michael would also like to thank his Mom for making him sit down one summer afternoon and watch this hilarious film. Alea jacta est.
More info

Amy was last seen on Plazaco's stage in ARSENIC AND OLD LACE as Rooney, and she's delighted to trade in Rooney's police badge for Alma's feather duster in PILLOW TALK. Born and raised in Chicago, Amy was active both onstage and offstage in the Windy City's theater community. She has played the roles of Inez in NO EXIT, Millie in PLAZA SUITE and Charlotte in BEYOND THERAPY. Her directorial credits include WAITING FOR THE PARADE and THE WOOLGATHERERS, and she's stage-managed productions including GOD'S FAVORITE and THE MATCHMAKER. On the writing side, Amy has penned and had produced plays including THREE SEASONS and CIRCLE OF INFINITY, and has reviewed hundreds of theater productions for newspapers in the Midwest, New England and Texas. Amy is thankful for the wonderful men in her life -- husband Dave and son Michael. She is also grateful to the producers and directors of PILLOW TALK for casting her in this terrific role. Enjoy the show!
More info

is thrilled to be working at Plaza once again. Stefanie has been seen as Patsy in CRAZY FOR YOU, Mrs. Flannery in THROUGHLY MODERN MILLIE, A Hot Box Dancer in GUYS & DOLLS, a Follies Girl in WILL ROGERS FOLLIES, Sally Chessington in CASH ON DELIVERY, Betty Blast in FOOTLOOSE and Mrs. Pierce in MY FAIR LADY. Other favorite roles include Purity in ANYTHING GOES at Stolen Shakespeare Guild, Viola in Shakespeare’s TWELFTH NIGHT, Maggie in JAKE’S WOMEN and multiple roles in THE DINING ROOM. Stefanie holds a Master of Arts from Texas Woman’s University with an emphasis in Directing and Stage Management and a Bachelor of Arts from Harding University with an emphasis in Acting. Stefanie is also a proud recipient of the 2009 Column Award for Best Stage Manager of a Musical-Non Equity. Special thanks to her family and friends for all their love and support, Hugs and kisses to Humphrey, Gigi, Lily, Fiona and Monica.
More info

This is the first show Amberly has been in. She is elated and feels honored to be apart of this production. During high school Amberly competed in prose and poetry readings. Amberly takes lessons from Don Shook. Amberly is also a nursing student at Tarleton State University. "I am so thankful to work with everyone in Pillow Talk. Your patience and kindness has touched my heart.
More info

Tabitha is very excited to be a part of the cast of Pillow Talk! She is a nineteen year old Freshman at Hill College in Hillsboro studying Music. Past roles include Liesl in SOUND OF MUSIC, Ariel in FOOTLOOSE, and Cordy in THE HAPPIEST MILLIONAIRE all at PTC. She is excited to be preparing to serve an LDS mission at the end of this year. As always, she sends love to Mom and Dad, Park, Cam, Edie, Mimi, and JJ.
More info

since his first appearance on stage in Johnson County in the Carnegie Players 2005 production of SOUTH PACIFIC, Jay is now appearing in his thirty-fifth play here in Texas. He last appeared on the Plaza stage as Grandfather in the award winning production of RAGTIME. He just completed a four weekend run with the Granbury Theater Company as Juror #3 in 12 ANGRY MEN. Obviously the list of his performances is long and include other fan favorites such as Elwood P Dowd in HARVEY, Abe Goldman in BEAU JEST, and Al Lewis in THE SUNSHINE BOYS, to name just a few. A retired educator from Colorado, Jay now enjoys life here in Cleburne with his lovely and supportive wife Corlis.
More info

is excited to be back on the Plaza stage. Previous PlazaCo roles include Abby Brewster in ARSENIC AND OLD LACE, Mrs. Chumley in HARVEY, Mary Read in TREASURE ISLAND, and Marion Hollander in DON'T DRINK THE WATER. JoAnn spends her days teaching theatre to some of the most talented kids around at Alvarado High School. A few of her favorite shows include: BOG OF CATS, MY NAME IS RACHEL CORRIE, and this year's musical - SEUSSICAL, THE MUSICAL. She is grateful to her students for their dedication and encouragement. And thankful that her husband, Bob, loves to cook.
More info

John is ecstatic to be performing in his 5th Plaza show. Past roles include Coach Dunbar in FOOTLOOSE, Officer Klein in ARSENIC AND OLD LACE, Sergeant Towers in SEE HOW THEY RUN, and his personal favorite, Bob Cratchit in A CHRISTMAS CAROL. John would like to send special thanks to his parents Jay and Shauna, and the JTAM CREW, especially Jaceson and A-A-Ron. "You miss 100% of the shots you don't take." -Wayne Gretzky
More info

It's been almost a year since we've seen Justin back on the plaza stage. Though he's been building sets for multiple plaza productions, he chose pillow talk to stand once again under the stage lights. Former characters Justin has portrayed have been Lyle, cowboy Bob, and dance corp in FOOTLOOSE, Angie the ox in GUYS AND DOLLS, and the ensemble of THE DROWSY CHAPERONE all at Plaza Theatre Company. Justin is currently in rehearsal as a dance corp member of DIRTY ROTTEN SCOUNDRELS at PTC under the direction of Luke Hunt. When he's able to tear away from the stage Justin enjoys composing and singing along with being a multi-instrumentalist. Justin would like to thank JTAM for this amazing opportunity to do a straight comedy, "a feat I've never before attempted."
More info

Cessany is thrilled to be here for her 11th show at Plaza! She is currently serving as the Production Assistant for the Fort Worth Opera Company, focusing on their production of GLORY DENIED. Cessany received her degree in Theatre and Music from Ouachita Baptist University and was a member of the school's chapter of Theta Alpha Phi national honors theatre fraternity. Her previous shows to manage/assistant manage include SEE HOW THEY RUN, A CHRISTMAS CAROL,FOOTLOOSE,GUYS AND DOLLS, THE DRWOSY CHAPERONE, FIDDLER ON THE ROOF,JOSEPH...DREAMCOAT, DON GIOVANNI, YOU HAVE TO SERVE SOMEBODY, ALL SHOOK UP, SEUSSICAL, and SIX CHARACTERS IN SEARCH OF AN AUTHOR. She has been seen on stage here at Plaza in RAGTIME and CRAZY FOR YOU. Cessany would like to thank Drew and Jojo for being awesome and putting up with her own special brand of crazy.
More info

Jamie Long Assistant Director: Jamie is thrilled to be back at Plaza as an Assistant Director. Thanks to JaceSon Barrus and this talented and personable cast and crew this experience has been both fullfilling and rewarding. Jamie has appeared in over 40 stage productions and some of his favorite roles have been here at Plaza. Felzig in THE DROWSY CHAPERONE, Colonel Pickering in MY FARI LADY and Dr Chumley in HARVEY. Other roles included Doc in THE WEST SIDE STORY, Oscar in CURTAINS, Erronius in A FUNNY THING HAPPENED. . .FORUM, David Bliss in HAYFEVER and Eusie in THE WEAVING (The Corrie Ten Boom Life Story)at the Lincoln Center in New York. Jamie has been married to his lovely Bride Alieze for 47 years and wishes to Thank Her for letting him get his kicks in the theatre.
More info

As Artistic Director at Plaza Theatre Company, JaceSon has the privilege of directing 1 or 2 shows a Plaza season. However with Pillow Talk, JaceSon is enjoying the opportunity of directing a play rather than a musical at Plaza for the first time since PTC's first ever offering - The Man With The Pointed Toes. He is also loving playing a role made famous by the wonderful Tony Randall. Other favorite productions he's had the pleasure to direct include AIDA, WILL ROGERS FOLLIES, THE SCARLET PIMPERNEL and ALL SHOOK UP. On stage he has enjoyed playing Harold Hill in THE MUSIC MAN, Henry Higgins in MY FAIR LADY, Father in RAGTIME and Captain von Trapp in THE SOUND OF MUSIC. He is forever grateful to be married to the splendid Tina Barrus and the proud father of sic extraordinary children - to them he sends much thanks and love.
More info