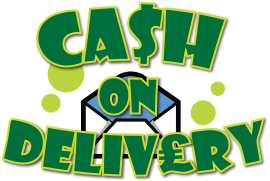 A con artist has been duping the Government for years by claiming every type of benefit for fictitious people. When welfare investigators show up, he has to do some very quick thinking to bring these made up people to life. Fast paced British farce at it’s very finest. 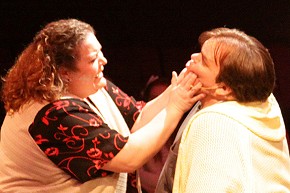 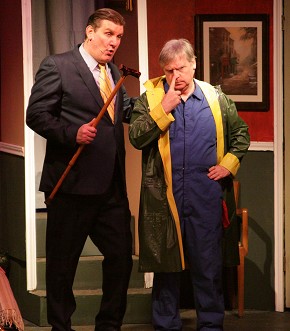 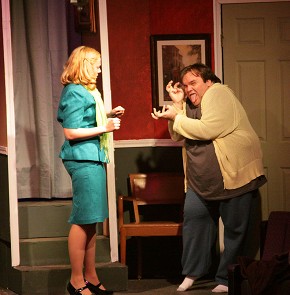 JaceSon joins this wonderful cast of performers after having first appeared as "Ms. Cowper" in CASH ON DELIVERY at PlazaCo in 2010. Other favorite comedy roles at Plaza include "Jonathan" in PILLOW TALK, "Link" in MAN WITH THE POINTED TOES and "Jonathan" in ARSENIC AND OLD LACE. While JaceSon does spend most of his time here at Plaza, he does love spending his free time with his wife and kiddos or watching classic movies or studying American Civil War trivia.
More info

Kristi is delighted to be back for her second show at PlazaCo. She was most recently seen as Sweetheart in EXIT, PURSUED BY A BEAR at Circle Theatre. Kristi's favorite roles include Jan in PILLOW TALK, Dawn in LOBBY HERO, and Mollie in THE MOUSETRAP. She holds a B.F.A. in Theatre Education from Midwestern State University. Kristi uses that degree as the Drama Director at Alvarado Junior High. Kristi would like to thank the teachers and directors who molded her into the person she is today.
More info

Mr. Walker is thrilled to be back on the boards to reprise the role of Jenkins at Plaza Co. after a few years hiatus. Theatrically during that time, he's been occupying himself with such roles as Rooster in ANNIE, Grandpa George in WILLY WONKA, and Froggy LeSuer in THE FOREIGNER. Previously,he's been seen on the Plaza stage in various roles including Bob Cratchit in A CHRISTMAS CAROL, Floyd in GHOST OF A CHANCE, Arthur Humphrey in SEE HOW THEY RUN, Samuel in CURIOUS SAVAGE, and various other roles in Plaza classics including SEUSSICAL, BEAUTY & THE BEAST, YOU CAN'T TAKE IT WITH YOU, etc. "Thanks to my lovely Suzy for correcting my English :)"
More info

Best known in and around the Johnson and Hood County area as an actor, Jay actually spent most of his life as an educator and sports official. He officiated football for over thirty years most of all of which was in Colorado at the high school level. He served on state and national committees and boards as an official and as an activities director. Now retired, Jay stays young by keeping up with the amazing theatrical talent of the southwest Metroplex. He last appeared on the Plaza stage in WHITE CHBRISTMAS and in six other shows in 2013 including 1776 in the Hood County Courthouse. Jay is the author of two published novels, which are available online at crossoflorraine.com and litofangels.com. He lives in Cleburne with his lovely and supportive wife Corlis.
More info

Kristi is excited to be back with the Plaza family! She has a Bachelor's of Arts Degree from Texas Wesleyan University, in which she studied Performance, Directing, Voice, and Playwriting. You might have seen her here at Plaza before as Dolly Tate in ANNIE GET YOUR GUN, Mrs. Hawkins in TREASURE ISLAND, Villager in FIDDLER ON THE ROOF, and Levi's Wife in JOSEPH...TECHNICOLORED DREAMCOAT. She has also played in other DFW area productions such as: Rona in 25th ANNUAL...SPELLING BEE, Jack's Mom in INTO THE WOODS, or as the Nurse in ROMEO AND JULIET. Kristi was nominated for "Best Featured Actress" for her role in TREASURE ISLAND in 2011. She was also the recipient of the Dooley "Director's Choice Award" in 2012. She would like to thank God, her family, and her friends for all their love and continued support.
More info

A year away from the stage, Nathan is glad to be back at Plaza for another great show. He was last seen in Plaza Company's production of A CHRISTMAS CAROL as a Solicitior. He has also enjoyed playing Officer Brophy in ARSENIC AND OLD LACE and Liver Lips Louie in GUYS AND DOLLS. Nathan is currently learning the piano to add to his creative resume while hoping to finish his first novel this year. He is thankful for a supportive family in these endeavours and looks forward to a year filled with wonderful shows.
More info

Stacey is excited to be returning to the Plaza stage as Ms. Cowper in this fun and fast paced show. You may remember her from SEE HOW THEY RUN, HELLO DOLLY, CHEAPER BY THE DOZEN, or even as The Voice of The Giant in INTO THE WOODS. Stacey has a BFA in theater performance from UT Arlington. Some of her favorite roles include Sheila in SORRY, WRONG CHIMNEY! and Ms. Potter in TOM, DICK, AND HARRY. She keeps herself busy running a small internet shop and chasing after her wild and rambunctious boys. "Thanks to my husband and sweet boyos for all of the support and snuggles!"
More info

This marks Stacey's 12th appearance on Plaza's stage, and she is thrilled to again portray the mood-swinging corpse-whomping fiancée of a cross-dressing shoe salesman! She was recently seen as The Detective in CLUE THE MUSICAL, another fun and favorite role. Others include Jolene Oakes in PTC's DIRTY ROTTEN SCOUNDRELS, Ethel McCormack in FOOTLOOSE, Clairee Belcher in STEEL MAGNOLIAS, and both Yente and Fruma-Sarah in two different productions of FIDDLER ON THE ROOF. She's a theatre and choral nerd who's been singing and performing for thirty years on various stages--cedar chests, school cafeterias, backyard monkey bars, gymnasiums, football fields, churches, auditoriums, showers, and... well, theatres. When she's not rehearsing or performing, Stacey is a busy Supported Employment Specialist with Goodwill. She's also an accomplished artist, professional photographer, published author, mom to two truly fabulous teens (love you guys!), and shower show-tune diva extraordinaire.
More info

(Stage Manager) Stefanie has stage managed lots of great shows with lots of great people and is a proud recipient of the 2009 Column Award for Best Stage Manager of a Musical-Non Equity. Stefanie holds a Master of Arts from Texas Woman’s University with an emphasis in Directing and Stage Management and a Bachelor of Arts from Harding University with an emphasis in Acting. "Hugs and kisses to Humphrey, Gigi, Mia, Belle, Lily, Fiona and Monica."
More info