Smoke on the Mountain Homecoming 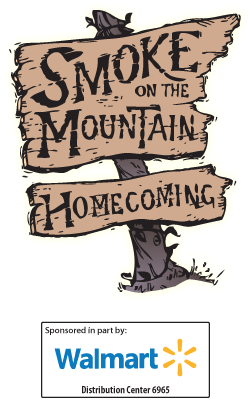 It's October, 1945, and the gospel-singing Sanders Family is back together again where it all started, at Mt. Pleasant Baptist Church, where the Reverend Oglethorpe is giving his last service. He's been called to preach in Texas, and has already bought his ten gallon hat and is ready to ride off into the sunset with his wife, June. Join the Sanders family as they send Mervin and June off in style, with story and song. Lots of that old-timey bluegrass gospel music, and the poignant humorous characters that we have all grown to love. 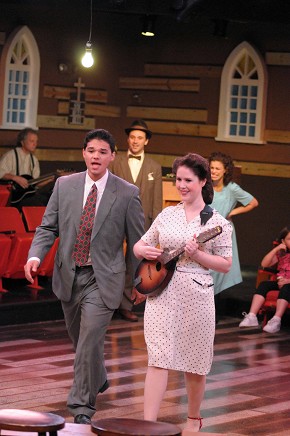 Andrew Guzman is delighted to be back at Plaza. You may remember seeing him as Dean Hyde in ALL SHOOK UP!, or as Jaycee Squires in MUSIC MAN, He also played Romeo in Carnegie's production of ROMEO & JULIET. Past show's include: SINGIN' IN THE RAIN, AIDA, MUSIC MAN, ALL SHOOK UP, I NEVER SAW ANOTHER BUTTERFLY at TAFA, YE OLDE TOY SHOPPE at TAFA... Andrew would like to thank his parents for "sparing him" so that he can do this. " Thanks mom and dad".
More info

You may remember Barbara as Clairee in STEEL MAGNOLIAS where she made her acting debut. A long-time resident of Cleburne and member of College Heights Baptist Church, she was encouraged by her friend, Corlis Cornils, to audition. Thanks Corlis! She feels so blessed to act. She would like to thank her wonderful husband, Robert, for his love and support and babysitting their grandkids while she has the "time of her life". Phillipians 4:13
More info

Over the years, Bill Ware has been involved in various Greater Cleburne Carnegie Players productions in various capacities including running lights and sound, designing posters and program books, playing guitar, and maintaining Web pages. For the past decade, he has played guitar for services at various Cleburne churches. He holds an M.A. degree in English from Texas A&M University. His past employment included various publication production positions including graphic design and technical writing. He has taught college level graphic design, technical writing, and English composition courses. A few of his poems have been published in small press and online magazines. His hobbies include repairing things by taking them apart and putting them back together, song writing, scroll sawing, airbrush painting, and photography. He and his wife Linda have two adult children, Katy and Kyle. Kyle and his wife, Courtney, have a daughter, Audrey.
More info

was happy to asked to play cousin Billy Bob in the band for SMOKE ON THE MOUNTAIN here at Plaza Theater. He is a local eye doctor and a part time bassist. He also plays bass and cello for the Brazos Chamber Orchestra and at First Baptist Church in Cleburne. He is married to JoAnn Gracey, the theatre arts teacher at Alvarado High School and has two wonderful kids...both in college!
More info

Camille is excited to be returning to Plaza Theatre Co. and to be a part of this amazing cast. She was last seen at Plaza as Annelle in STEEL MAGNOLIAS. Some of Camille's favorite Plaza roles include Sarah in BEAU JEST, Florence in CURIOUS SAVAGE and MAN WITH THE POINTED TOES, and Ado Annie in OKLAHOMA, Some of her favorite roles include Sylvia in SYLVIA, Maggie in LEND ME A TENOR, and Sabrina in SABRINA FAIR. Both Camille and June hope that their babies don't make any surprise guest appearances for you tonight!!!!!
More info

Ticklin’ the ivory’s for a 5th go around with the Sander’s cousin’s once again, Cheri is glad to return to the family. A trained singer and professional musician, she is a veteran teacher of music, specializing in piano, voice, and guitar with over 40 students through the DFW metroplex. She was last seen on the Plaza Stage as Mother Abbess in the Sound of Music. She is grateful to her husband for putting up with her hobby and sends her love/blessings with her LA/Hollywood-bound son. “I love you and miss you!”
More info

Kyle is just thrilled to be making a "joyful noise" in his Plaza debut! He recently directed a critically acclaimed 25TH ANNUAL PUTNAM COUNTY SPELLING BEE, designed BRIGHTON BEACH MEMOIRS and appeared in BEST LITTLE....IN TEXAS. At GLCT he starred in THE COMPLETE WORKS OF WILLIAM SHAKESPEARE (ABRIDGED). Other roles include Barry in THE BOYS NEXT DOOR, Josh in BRIGHT IDEAS, Frederick in NOISES OFF, Dr. Mike in IT RUNS IN THE FAMILY, Claudio in MUCH ADO ABOUT NOTHING, OTIS in BIBLE ABRIDGED, Rudolpho in A VIEW FROM THE BRIDGE, Tybalt/Mercutio in ROMEO AND JULIET, Longaville in LOVE'S LABOURS LOST, FRANK-N-FURTER in THE ROCKY HORROR SHOW, Valentine in TWELFTH NIGHT, and Coach/Cowboy Bob in FOOTLOOSE. His directing credits include GOOD MAN...CHARLIE BROWN, MY FAIR LADY, LITTLE SHOP OF HORRORS, GREATER TUNA, LIZARD, STEEL MAGNOLIAS, NO EXIT, FUNNY THING....FORUM, BIBLE ABRIDGED, LINE, and GHETTO. Thanks to the good folks at Plaza for this opportunity and to KS and WT for their support
More info

is honored to be on the PTC stage once again with such a great cast. Previous favorite roles at PTC include Sylvia in ALL SHOOK UP, Muzzy in THOROUGHLY MODERN MILLIE, Miriam in BEAU JEST, Janet in KISS AND TELL, Abby Brewster in ARSENIC AND OLD LACE, Vera in SMOKE ON THE MOUNTAIN series, Miss Skillon in SEE HOW THEY RUN, Verna in GHOST OF A CHANCE, and Vi in FOOTLOOSE. Other favorite rolls include Miss Hannigan (ANNIE), Golde (FIDDLER ON THE ROOF), Aunt Eller (OKLAHOMA) and multiple roles in LUCKY STIFF. Past experience includes director, choreographer, studio vocalist, vocal coach, percussionist and live sound engineer. Darcy enjoys serving as vocalist/percussionist and drama leader at her church, and working her day job in the financial planning arena. Thanks to the Lord for allowing me to use my gifts and talents along side such a great group of people at PTC, and to JaceSon, Aaron, Tina & Milette: I love you guys. It’s an honor to be a part of your dream and the Cleburne comm
More info

is very excited to playing Burl once again after already playing Burl for 70 performances. Aaron is one of the founding producers here at PlazaCo and had been in many productions here. Favorite roles include Horton in SEUSSICAL, Jim in ALL SHOOK UP, Charlie Brown in GOOD MAN...CHARLIE BROWN, and Pap in BIG RIVER. Aaron is the father to 3 wonderful kids and husband to his lovely wife, Milette. Aaron also won a 2010 Column award for Best Sound Design in a musical for PlazaCo's production of AIDA.
More info

This will be JaceSon's fourth appearance in productions from the SMOKE franchise and he couldn't be more pleased to be returning as Stanley, a role he dearly loves. JaceSon thinks that this HOMECOMING installment of the series is the perfect ending to a wonderful story. Other favorite roles include Petruchio in KISS ME KATE at Stolen Shakespeare Guild, Gaston in BEAUTY AND THE BEAST at Greater Cleburne Canegie Players and Schroeder in YOU'RE A GOOD MAN, CHARLIE BROWN here at PlazaCo. But his favorite role is as husband and dad - he and his wife Tina recently enjoyed the new addition of Jonah Jaxon to the family. "Love to my pretty girl and the kiddos. Y'all make it all worthwhile".
More info

is super excited to be a part of her first SMOKE show! And for an excuse to learn another instrument and dye her hair.... Jill was last seen at Plaza as crazy Rapunzel in INTO THE WOODS, Miss Dorothy in THOROUGHLY MODERN MILLIE (which she also choreographed), and various showgirls in WILL ROGERS FOLLIES, as well as SHOW BOAT at Lyric Stage. She holds a Bachelor of Music in Musical Theatre from Oklahoma City University, where her favorite roles include Chava in FIDDLER ON THE ROOF, Miss Titmouse in TOO MANY SOPRANOS, and the ensemble of ASSASSINS. She would like to apologize for being 12 years out of practice on the fiddle and hopes she'll have figured it out by the time you are reading this. Many thanks to JTAM, Cheri, Randy, and the lovely Sanders family!
More info

says after seeing the 2007 Smoke on the Mountain seven times, then playing Miss Maude in 2008 production of SMOKE ON THE MOUNTAIN and in the 2009 production of SANDERS FAMILY CHRISTMAS, she feels honored to once again portray Miss Maude of the Mount Pleasant Baptist Church. Judy caught the “acting bug” when she had one line in Plaza Theatre's FOREVER PLAID. Since she has been an assistant manager at Plaza for MY FAIR LADY and a producer for Carnegie’s summer musical, Oliver!, as well as a sound tech for LION WITCH AND WARDROBE for Carnegie. Other Plaza Theatre productions were SOUND OF MUSIC and SINGIN IN THE RAIN. Judy is a native of Cleburne and a graduate of Cleburne High School many, many years ago. She discovered the joy of participating in community theatre and feels that the Barrus and Siler families have been a blessing to her and Cleburne. She wishes to thank her husband, Dale, family, and friends for their steadfast encouragement and support!
More info

is very happy to be in the family and band for SMOKE! He and his wife moved to Burleson it May 2008. Before that, he was a band director, private instrumental instructor and performer in the SW Houston area. He is a multi-instrumentalist trained in classical and jazz. For his last seven years in Houston, he was the electric/acoustic bassist, tubist and associate conductor for The Masquerade Theatre, resident company in the Hobby Center in downtown Houston. Currently, he teaches flute, clarinet, saxophone, oboe, bassoon, trombone, euphonium, tuba and electric bass in Crowley and Forney ISDs, and performs with the Brazos Chamber Orchestra on acoustic/electric bass, and the German Band of North Texas on oboe/English horn and flute. He is also a faculty member of Mountain Valley Studios in Joshua, teaching woodwinds and brasses.
More info

You may remember Priscilla at PlazaCo as Berthe in THE SOUND OF MUSIC. Happily married to husband Richard, Priscilla currently lives in Cleburne and teaches at Smith Middle School. Has 2 stepsons, Jamie & Jeremiah and is the 7th of 9 children. "Thank you to my family and friends for all of your love and encouragement!"
More info