Harvey tells the story of an affable man named Elwood P. Dowd and his unseen to all but Elwood, presumably imaginary friend Harvey, a six-foot, three-and-one-half-inch tall rabbit. When Elwood starts to introduce Harvey to guests at a society party, his society-obsessed sister, Veta, has seen as much of his eccentric behavior as she can tolerate. She decides to have him committed to spare her daughter Myrtle Mae and their family from future embarrassment. Comedy ensues when the folks at the Sanitarium have Veta committed instead of Elwood. This is the play on which the famous movie starring James Stewart is based. 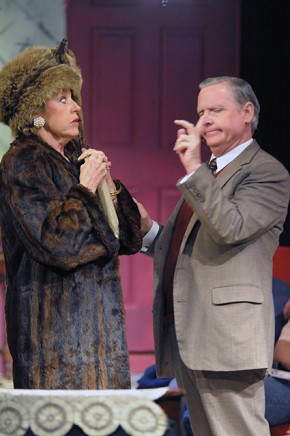 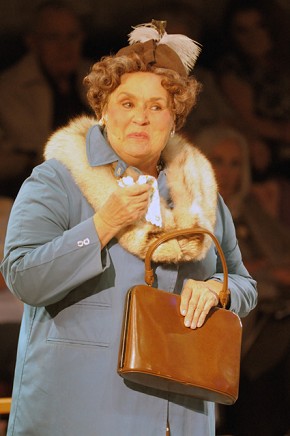 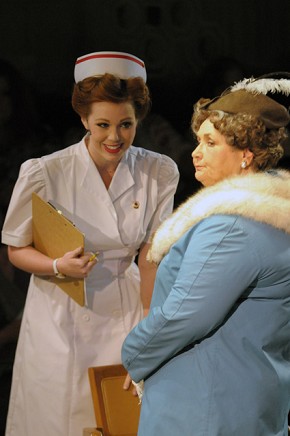 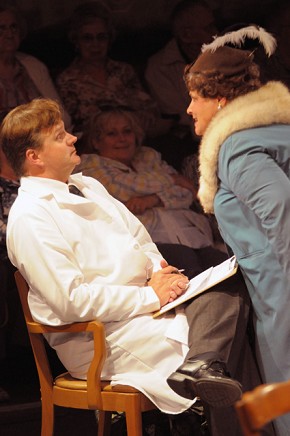 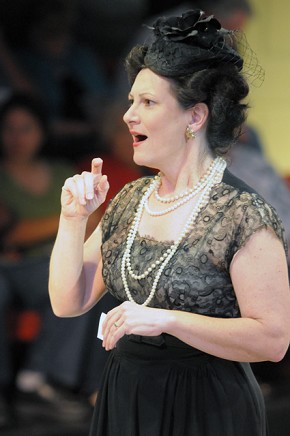 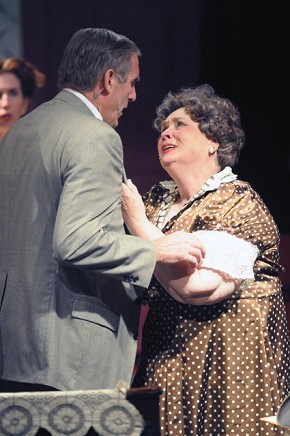 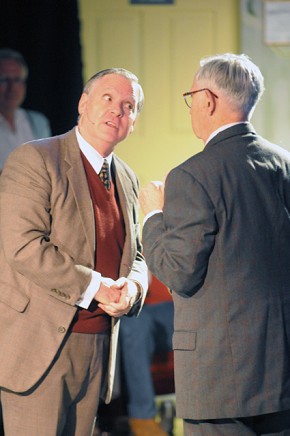 as the 'M' in the 'JTAM' co-founding producers here at PlazaCo Milette has appeared in many productions most recently as Pam Wright in THE MAN WITH THE POINTED TOES. Also as Baker's Wife in INTO THE WOODS, Miss Sandra in ALL SHOOK UP, Martha in SECRET GARDEN, Lucy in GOOD MAN...CHARLIE BROWN, Eliza in MY FAIR LADY, and a Follies Girl in WILL ROGERS FOLLIES just to name a few. Milette also seen in the DFW area at OnStage in SUNDAY IN THE PARK WITH GEORGE (Frieda), and then at Fort Worth Opera as a super in DON GIOVANNI. Milette sends big hugs and kisses to her wonderful family!
More info

has stepped back onto the stage after an absence of, well, a lot of years, to play the wonderful role of Veta. Katy has spent years behind the scenes producing, directing, and teaching young people the love of theatre. Her favorite experience was directing a traveling children’s theatre group that performed plays like THE LION, THE WITCH, and THE WARDROBE all over Maui, Hawaii. Katy is a certified teacher, holds a B.A. and M.A. in Drama, and has been a UIL One Act Play judge. "Thank you, Scott, for cooking all those chicken nuggets and fries for the kids so I could go off and rediscover my inner drama queen! And thanks to you, Christopher and Julia, for running all those lines with me!"
More info

After 35 years of acting, directing, teaching,writing, and owning her own arena theater in Utah, Soni and her husband packed up and moved to this charming little town called Cleburne, Texas to retire and lend a hand to her son and his family here at Plaza theater. One could imagine after that many years, that she has been on stage for a day or two. Some of her favorite roles include: Miss Hannigan in ANNIE, the Narrator in JOSEPH AND THE AMAZING TECHNICOLOR DREAMCOAT, Ida in SEE HOW THEY RUN, and her all time favorite, the Charwoman in A CHRISTMAS CAROL which she has done off and on for some 20 years. "The best part about playing in HARVEY aside from this lovely and talented cast, is that I get to work with my husband and my son, both on stage and off. Kudoos to Plaza theater company for all their good work".
More info

comes to the Plaza Theatre Company on loan from the Carnegie Players where he serves as executive administrator. Many of his fans will be happy to see Jay back in a role like Elwood after playing Bob Ewell in Carnegie's production of TO KILL A MOCKINGBIRD. Needless to say, Elwood P Dowd is a character much more like Jay's Clarence Odbody in last December's IT'S A WONDERFUL LIFE rather than the evil and malevolent Bob Ewell. "Actually, it was all in the toothpick." All kidding aside, Jay is delighted to be back in the round playing a wonderful, lovely fellow like Elwood. He is grateful to his beautiful and supportive wife Corlis for her love, devotion and patience with Jay's many hours in rehearsal. And just remember in this life you must either be oh so smart; or oh so pleasant. For years - like Elwood - Jay has always been smart, but now he recommends pleasant. You may quote him on that.
More info

is over the top delighted to be back on the stage at Plaza Theatre Company, and performing with such a "star" cast. This is her third production since playing CLAIREE in STEEL MAGNOLIAS and MYRTLE, one of the "Amen" ladies in SMOKE ON THE MOUNTAIN HOMECOMING. She sends a big and loving thank you to her husband, Robert, for holding their home together while she pursues her dream.
More info

feels privileged to be a part of Plaza Theatre's 2011 performance of HARVEY. Judy enjoys all aspects of community theatre performance. Onstage as an actor in SMOKE ON THE MOUNTAIN, SANDERS FAMILY CHRISTMAS, SMOKE ON THE MOUNTAIN HOMECOMING, SINGING IN THE RAIN, SOUND OF MUSIC; or behind the scenes, as producer, asst. director, or sound tech in productions of DRACULA, OLIVER, THE LION, THE WITCH, AND THE WARDROBE, MY FAIR LADY; and as a volunteer making popcorn in concessions. She has volunteered with Plaza Theatre Company and Carnegie Players Theatre since 2007. Judy is a native of Cleburne and a graduate of Cleburne High School many, many years ago. She wishes to thank her husband, Dale, family, and friends for their steadfast encouragement and support.
More info

Trich is excited to be back on the boards of Plaza Theatre. She was last seen at Plaza as Emma in Over the River and Through the Woods. Before that as Truvy in Steel Magnolias.Trich works in theaters all over the Metroplex and is represented by Linda McAlister Talent. She, along with business partner Cindy Almond, have their own production company, A to Z Girls Productions, LLC. Trich would like to thank the residents of Cleburne and surrounding communities for their love and support of this wonderful Plaza Theatre. She would also like to thank her family for all their support especially husband Al for taking care of the llamas so she could be a part of this show. "I would like to give bravos to the Silers and Barrus's for their amazing abilities to produce and star in the most wonderful shows in the Metroplex. Keep up the great work."
More info

is thrilled to be doing her first show outside of school at Plaza Theatre Company! Rachel is a theatre major at Texas Wesleyan University with a performance emphasis. She played Chick Boyle in CRIMES OF THE HEART, the Third Witch in MACBETH, and Louise Charteris in WE WERE DANCING at Texas Wesleyan. "Thanks to my wonderful parents for allowing me to pursue my dream, I love both of you so much."
More info

has long admired this play, but has never actually gotten to take part in a production of the show, so he's excited for the chance to play the ham-fisted orderly Wilson. Especially since he gets to say one of his favorite lines he's ever read in a play. He's also enjoying the opportunity to act with his Mom and Dad who are recent transplants to Texas. You may have seen JaceSon in other roles here at Plaza including as Link in MAN WITH THE POINTED TOES, as Uncle Stanley in the SMOKE ON THE MOUNTAIN Trilogy, or as Farleigh in Plaza's recent production of THE SCARLET PIMPERNEL. Of course, JaceSon's favorite role is as Dad and husband and he's sends all his love to his wonderful family.
More info

This is Michael's ninth show with PlazaCo. He was last seen in his favorite role to date in A CHRISTMAS CAROL as Charles Dickens/Fred. He has also enjoyed playing Mr. DePinna in YOU CAN'T TAKE IT WITH YOU and Mr. Forbright in CASH ON DELIVERY. Other shows at PlazaCo include SEVEN BRIDES FOR SEVEN BROTHERS, OKLAHOMA, and THE CURIOUS SAVAGE. Michael sends his love to his wife Aimee and his three great kiddos, Rylee, Aubrie, and Jake for their support. Michael enjoys his vocation as an English teacher and loves reading and studying War Between the States history as well as Shakespeare and Poe. Thanks go out to this remarkable cast and to Aaron Siler for casting him in the role of Wilson. "Acting is a question of absorbing other people's personalities and adding some of your own experience." Jean-Paul Sartre.
More info

is appearing in his seventh production at Plaza, most recently as Sir Anthony Dewhurst in THE SCARLET PIMPERNEL. His other roles at Plaza include Eric Swan in CASH ON DELIVERY, Frank Gilbreath, Sr. in CHEAPER BY THE DOZEN, and Charles Dickens in A CHRISTMAS CAROL. He has also appeared locally with the Carnegie Players as Aslan in THE LION THE WITCH AND THE WARDROBE, Thomas Jefferson in 1776, and Count Dracula in DRACULA. He is the theatre arts teacher at Alvarado Junior High School and co-owner of Dance Across Cleburne with his wife, Rachel. He has never admitted to seeing rabbits his size. He would like to thank Aaron Siler for the opportunity to play this role and work with this wonderful cast.
More info

is pleased to be in this his ninth show at Plaza and with such a wonderfully talented cast and crew. Jamie was recently in THE SCARLET PIMPERNEL and played the dual roles of FOSTER WILSON and PAWNEE BILL in the stunning Musical ANNIE GET YOUR GUN. Jamie has been in over 30 plays at various theaters in the Fort Worth area the past 6 years and earned a Best Supporting Actor Award (An Ony) at Onstage in Bedford as Erronious in A FUNNY THING....THE FORUM. He appeared as EUSIE in THE WEAVING at ALICE B. TULLY HALL in LINCOLN CENTER on Broadway in New York City. Two of his favorite roles here at Plaza were as FRANZ the Butler in THE SOUND OF MUSIC, and as Colonel Pickering in MY FAIR LADY. He would like especially to Thank Aaron for letting him loose on the world in this part. And also a Special Thanks to Alieze, for 45 years of wedded bliss this year. "We hope that you have some real fun tonight and enjoy Our show and plan on coming back to see us again."
More info

Barbara Richardson is back in her second first Plaza Theater production. You may remember her from the PlazaCo production of STEEL MAGNOLIAS last year. She has previously appeared in numerous community theaters around the DFW area.
More info

JoAnn spends her days teaching theatre to some of the most talented kids around. A few of her favorite shows include: BOG OF CATS, MY NAME IS RACHEL CORRIE, and this year's one act - THE MADWOMAN OF CHAILLOT. She is grateful to her students for their dedication and encouragement. And thankful that her husband, Bob, loves to cook.
More info

Jodie is excited to be in Texas and to be playing in his first and hopefully not last production here at Plaza. His favorite roles include Froggy in the FOREIGNER, Judge Thatcher in BIG RIVER, the Bishop of Lax in SEE HOW THEY RUN, Monsignor Ryan in THE UNSINKABLE MOLLY BROWN, and Samuel in THE CURIOUS SAVAGE. He enjoys basketball, movies, running, good Mexican food, and playing with his grandchildren Tab, Park, Cam, Eden, Mimi, and JJ. He also enjoys being in this show with his wife and son and the amazing cast that he is getting to know.
More info

is a co-founding producer here at PlazaCo and if you have been here before then I am sure you have seen him. Aaron has performed in numerous productions around the country. You may remember him as Burl in SMOKE ON THE MOUNTAIN, Horton in SEUSSICAL, Buffalo Bill in ANNIE GET YOUR GUN, and most recently as Elton in THE SCARLET PIMPERNEL. Aaron just won FIVE area live theatre awards with THE COLUMN AWARDS including Best Director of a musical, Volunteer of the Year, Best Sound Design, and more.
More info