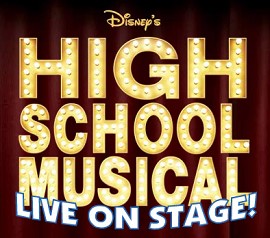 Disney's worldwide smash hit focuses on a high school jock, Troy, and a nerd, Gabriella, who, while on their family vacations, discover they both love singing. They decide to try out for the high school musical but their friends try to stop them. All the songs are here with "Breaking Free", "Start of Something New", "Status Quo" and everything in between. Plaza's second year of presenting its youth summer show camp will be even better presenting this Disney sensation.

Book By David Simpatico
Songs by Matthew Gerrard and Robbie Nevil and Ray Cham and Greg Cham and Andrew Seeley and Randy Petersen and Kevin Quinn and Andy Dodd and Adam Watts and Bryan Louiselle and David N. Lawrence and Faye Greenberg and Jamie Houston
Music Adapted, Arranged and Produced by Bryan Louiselle
Based on a Disney Channel Original Movie written by Peter Barsocchini 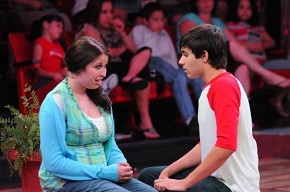 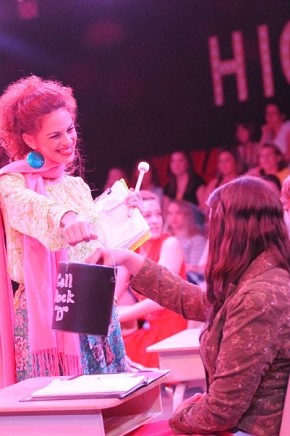 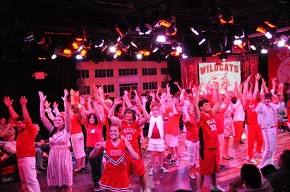 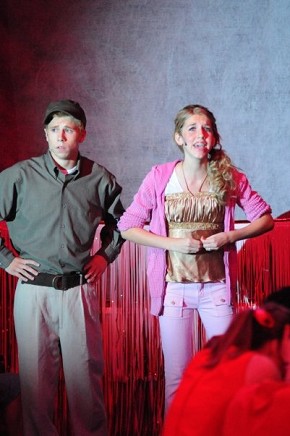 happy to be back at PlazaXo after performing in Suessical The Musical as Who, Hunter, and hunch. Been performing since 8th grade in JOLLY ROGER AND THE PIRATE QUEEN as Capt. Belvedere and in A GAP IN GENERATIONS as Dr. Graziano.”I am very glad to be a part of Plaza and am very excited to be be in High School Musical. Getcha head in the Game!”
More info

is very excited about making her debute performance in one of her all time favorite musicals. Some of her favorite past rolls include: Grace in CHS Annie and Beth in Carnigie Players production of The Best Christmas Pageant Ever. She would like to thank Everyone who gave her rides to and from practice, and her Lord and Savior Jesus Christ for giving her this opportunity.
More info

is delighted to be making her Plaza Theatre Debut! She’s sung in multiple variety shows (with Carnegie Players & TAFA), and TPSMEA All Region & All State Choirs. Addie’s starred in TAFA dramas under the direction of Shannon Loose and Taffy Geisel, and is grateful to the Lord for her new Plaza friends!
More info

Avery’s been in numerous TAFA drama and musical productions. One of her favorite roles was Gretl in THE SOUND OF MUSIC. She’s sung in both Con Spirito Choir and TPSMEA Children’s Honor Choir. Avery’s elated to be making her Plaza debut, and thankful to the Lord for this experience!
More info

Bree is glad to be working with Plaza Theatre Company on High School Musical! She has several music degrees, has lived in Leicester, Somerville, Cambridge and Fort Worth, has a dog named Georgiana, is Daron Cockerell’s sister but most importantly, helped make Sharpay’s Fabulous pen. She also loves the beach but hates the heat.
More info

is making her Plaza Theatre Debut. She is a student at Joshua Junior High and is a part of the school’s drama program. She has appeared in A Midsummer Night’s Dream and many one-act plays through her school. Brooke is also a part of the Joshua Royal Belles Dance Team and the school Color Guard. She hopes that this is only her first of many appearances with The Plaza Theatre.
More info

is pumped to be performing for the first time on the Plaza stage in one of his favorite roles yet. Previous roles include the Mad Hatter(Alice in Wonderland) and Tom Snout(A Midsummer Night’s Dream). Caleb would like to extend a huge thank you to his family for being so supportive and patient with him during the production process; also thanks for the gas money so that he could trek up to Cleburne every day! Enjoy the show!
More info

is a freshmen at CHS. She has been in 5 other plays. Her favorite thing to do in her free time is sing, and dance. Carlie would like to thank JaceSon, Tina and Tabitha for giving her a chance of a lifetime.
More info

is making his theatrical debut here at PlazaCo. “Special thanks to Uncle G. and Aunt Laura for paying the camp bill.
More info

is excited to do another show here at Plaza. She is also performing as Josie Swane in BY THE BOG OF CATS at Alvarado High School where she has been a Dance Captain and also Alice in BCPE and many more. Crystal would like to thank Mommy, Daddy, Baylor, Bahrah..., Kristi, Gracey, and Smiley Kylie.
More info

is excited to make his debut at Plaza playing the role of Chad in DISNEY’S HIGH SCHOOL MUSICAL. You might have seen Dade as Gaston in Carnegie’s adaptation of DISNEY’S BEAUTY AND THE BEAST. Dade is thrilled to share the stage once again with some of his closest friends and to have added some during this show. Thanx to JaceSon and Tina for being great directors and putting up with all of us, love you guys. Special thanx to God for without whom none of this would be possible.
More info

has been in many shows here at Plaza including A CHRISTMAS CAROL, SEUSSICAL, and FOOTLOOSE.
More info

is proud to be back at Plaza after FOOTLOOSE, THE SOUND OF MUSIC, AIDA, and SINGIN’ IN THE RAIN. Plaza has become like his second home, and he would like to give a shout out to all his friends reading this!
More info

Emily is very excited to be in he 3rd production at plaza theatre co. she’d like to thank her parentsand 2 special people who helped me br here, and to all the wonderful people here at plaza. so sit back and relax as plaza theatre proudly presents HIGH SCHOOL MUSICAL!!!
More info

is a sophmore at Cleburne High School where she participates in choir and show choir. Making her PlazaCo debut but was in Carnegie Player’s production of OLIVER. “Shout out to my parents, Sancho, Aquaman, Coral, & my Grandparents. Thank you so much for supporting all of my decisions. I love you all so much!”
More info

is a senior at CHS. He has been seen in numerous Carnegie and CHS Productions. He is happy to share his first Plaza Show with his best friends Julie Morrison, Seth Cunningham and Abby Benke. Garrett would like to thank JaceSon, Tina and Tabby for giving him this wonderful opportunity.
More info

is enjoying her second show at plaza theater. She plans to attend Ouachita Baptist University to study musical theater. She would like to say thanks to Seth Cunningham for being her best friend and always being there just like kindergarten. :)
More info

is excited to be making his Plaza debut in HIGH SCHOOL MUSICAL. He has enjoyed being in camp and working with the awesome cast and crew! Nicholas would like to thank his parents and JTAM for this incredible, life-changing experience. Hebrews 13:8
More info

making his PlazaCo debut. Has been in numerous school plays/movies and was recently cast in THE PROMISE in Glen Rose, TX. Also enjoys photography and movie production. “Thanks Mom & Dad for all your support to help me do what I love.”
More info

is making his 3rd appearance on the Plaza stage after being in A CHRISTMAS CAROL as Teen Scrooge, and AIDA. He wants to make a shout out to the phenominal and beautiful Kaleigh Mangrum for supporting him. Getcha head in the game!
More info

- Jillian is a Jr. at Travis Academy of Fine Arts where she has studied choir, ballet, and drama through the years. She is grateful to Plaza Theatre for giving her the opportunity to be in this great production with such a wonderful cast. Past experience includes: “Striking Out”, all three Musical Extravaganzas at TAFA, and multiple church musicals. “Isn’t Troy Bolten just the Hottie Superbomb!!”
More info

is excited to return to Plaza Theatre Company in Disney’s High School Musical. She was last seen as Lolly Pup in several of the Lolly Pup Round-up series. In Jordyn’s spare time, she likes to travel the world...this summer trip...London and play basketball and softball.
More info

is excited to be doing High School Musical for her debut at Plaza Theatre. She is 18 and will be attending A&M University in the fall. She attended the New York Conservatory For Dramatic Arts’ “Summer in the City” and has most recently been seen in CHS’s productions of Annie and The Insanity of Mary Girard. She thanks her family and friends for being so supportive, and God for blessing her with this opportunity.
More info

You might have seen Kaitlin Goodwin as Belinda Cratchet in A Christmas Carol. she loves to sing, act, make bracelets, and read in her spare time. “Thanks mom for driving me to practice.”
More info

is thrilled to be a part of “High School Musical”, her 4th show at Plaza Theatre. Katie is a homeschooled 9th grader, enjoys spending time with her youth group at Westhill church of Christ, likes to sing, dance, and loves every minute of her time at the theatre.
More info

was last seen as a Who cadet “with an attitude” in Seussical the Musical. She is a 7th grader at Glen Rose Junior High. She would like to thank her parents for their support in her acting endeavors.
More info

This is Kortney’s first performance with the Plaza Theatre Company. She is thrilled to be part of the talented and creative cast of High School Musical. She is in 7th grade at Rio Vista Middle School and loves acting, swimming, and basketball. Kortney hopes to be back next summer for her second performance.
More info

Kristen is so excited to be in her very first show with her bestest new friend Emily pierce. she wishes to thank her dad because without him she wouldn’t even be here.
More info

is crazy pumped to be in his first Plaza production. Seth has been acting for 5 years and has been in 12 shows. His favorites parts include Harry Macaffee (Bye Bye Birdie), Daddy Warbucks (Annie), and most recently Lumiere (Beauty and the Beast). Seth is going to be a senior at Cleburne High School, and after this year, plans to go to Sam Houston State to pursue musical theatre, just one stop on the road to his dream of being on Broadway. Big thanks go out to the Barrus family and Plaza Theatre Co. for allowing me to learn in a brand new style and reminding me why I do what I do!! Lovelovelove.
More info

is happy to be making her summer show here in plaza for her third year in a row. She was most recently seen in the ensemble of FOOTLOOSE and as Millie in OKLAHOMA back in 2007. Stephanie is currently a new 8th Grader in the Treble Honor Choir and Plays French Horn in the Honor Band at Alvarado Junior High. She is thankful that the theatre can be a part of her life and glad that she can always make more friends. Stephanie Loves to participate in anything that involves her singing and sends thanks to all the people who help teach her to become better in many ways. Thx to all my Besties for always being there and helping me get through. w/o you I would not be here today. :)
More info

is excited to be playing with this amazing cast! You might reconize Taitha from shows such as KISS AND TELL, SINGIN’ IN THE RAIN, SOUND OF MUSIC, and AIDA. Tab sends a shout out to her wondeful family and epic friends. “Don’t Be So Mayo!!!”
More info