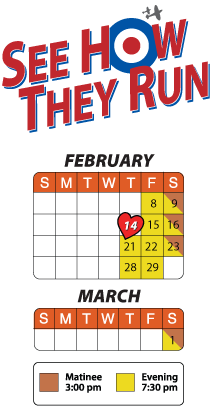 So swift is the action, so involved the situations, so rib tickling the plot that at its finish audiences are left as exhausted from laughter as though they had run a foot race. A hilarious laugh riot! Tickets are Adults - $10, Students and Seniors - $8, Children - $7

Treat your Valentine to a special performance at Plaza Theatre on Valentines Day!

The special includes a romantic pre-show dinner with live music at The Lemon Sisters Cafe just for Plaza patrons. After dinner walk across the street to see a hilarious show on the Plaza stage with dessert during intermission, his and her gifts, and dancing afterwards that will end a wonderful Valentines Day you and your sweetheart will never forget.

loves working behind the scenes whether it be costumes, hair/makeup, props or even warming up the director's cup of coffee--smiles. She has helped with many college plays such as JAMES AND THE GIANT PEACH, THE SOUND OF MUSIC, and MUCH ADO ABOUT NOTHING. Recently she has enjoyed working with Tina Barrus on costumes/hair for Plaza's production of OKLAHOMA. She is so jazzed to be helping once more for SEE HOW THEY RUN. The cast is hilarious, the director/producers are wonderful, and everyone in-between is such a joy to be around.
More info

is a theatre lover, and has enjoyed taking part in various productions for almost nine years. This is the third show that Caroline has costumed. She is so honored and excited to be a part of SEE HOW THEY RUN, and would like to thank Tina for trusting her, Jonathan and David for letting her play and Paula Sterrett for giving her a passion for the stage.
More info

is thrilled to return to the PlazaCo stage. She was previously seen at Plaza in THE SECRET GARDEN as Lily and in A CHRISTMAS CAROL as Mrs. Cratchit. She would like to thank her children, Lauren and Garrett, for all the years of comedic training. Keeping them entertained has been great preparation for this role! Also, a big thank you to her sweet husband, Jeff, for encouraging her to pursue her passion! And to the entire Plaza family, “I love you!”
More info

is thrilled to not only direct this wonderful cast but act with them as well! Favorite credits include Jesus in GODSPELL, Huck in BIG RIVER, Troy in HICH SCHOOL MUSICAL, Snoopy in CHARLIE BROWN, Orrin Peasley in CAROUSEL, Mr. Frank in DIARY OF ANNE FRANK, and Mortimer in ARSENIC & OLD LACE here at Plaza. He served as the resident technical coordinator at CATS theatre for the 2006-2007 season. He is currently a full time student at TCC in the Cornerstone Honors program and is pursuing film and theatre. Deepest dream is to be a light in the darkness to change the world loving one person at a time. To Mom, Dad, Joey, Tim, Mary, Stephen, Kyle, Shelby, Caro, Singletons, McElrees, Geisels, Barrus and Silers- "You are PRECIOUS to my heart and I love every one of you". To Jesus be ALL glory. (Exodus 14:14)
More info

is so glad to be back with her friends here at Plaza! She is currently keeping busy in her third semester at UTA majoring in theatre. She was last seen on UTA’s Main Stage as Irene Malloy in THE MATCHMAKER, Gurtie (the girl with the crazy horse laugh) in OKLAHOMA and June Sanders (the girl with the crazy signing) in SMOKE ON THE MOUNTAIN right here at Plaza. (She gets a lot of crazy roles apparently.) Danielle has been in theatre for over six years and wants to pursue it as a career. She has already been in a film and commercial and would love to make it into the movies God willing. Danielle gives all the glory to her Lord and Savior Jesus Christ who gave her this talent for some crazy reason. “Thank you mom and dad for letting me disappear off the face of the earth to drive all the way here for shows and still support me! That thanks also goes to all my wonderful friends, and GB.”
More info

was most recently seen at Plaza serving up Elderberry wine as Abby in ARSENIC & OLD LACE. Darcy also played as Mrs. Winthrop in THE SECRET GARDEN, Aunt Eller in OKLAHOMA!, and Vera Sanders in SMOKE ON THE MOUNTAIN here at PlazaCo. Other favorite on stage rolls include Miss Hannigan in ANNIE, Golde in FIDDLER ON THE ROOF, disciple in GODSPELL, and multiple characters in Theatre Arlington’s production of LUCKY STIFF. Past experience includes director, choreographer, studio vocalist, vocal coach, percussionist and live sound engineer. Darcy enjoys serving as vocalist, percussionist and drama leader at her church, and working her day job in the financial planning arena. I’d like to thank the Lord for the gifts and talents He’s given me, and the Barruses and Silers for allowing me to be a part of their dream. I’m so excited for the Cleburne community!
More info

is in yet another show at Plaza Co. Favorite roles include Pap in BIG RIVER, Lazar Wolf in FIDDLER ON THE ROOF, Dr. Neville Crane in THE SECRET GARDEN, Burl Sanders in SMOKE ON THE MOUNTAIN, and Sparky in FOREVER PLAID. He has a wonderful wife, Milette, and three wonderful kids. In fact Aaron believes himself to be one of the luckiest persons in the world by living the dream and still having a wonderful family at the same time!
More info

is just tickled to be apart of her second Plaza Theatre production. Her first was a role in OKLAHOMA! "Once again, I get to work with an incredibly talented group of actors, directors, and producers. Each one has been so patient and willing to work with me, and for that I am eternally grateful!" Heather would like to thank God for the many miracles and blessings in her life, one of them being able to work here, and to everyone who has made this production possible. "Your efforts have not been in vain, for I may truly say my soul has been and will be edified."
More info

is excited to be be back on the Plaza stage! Holly is a history and communications major, and has just finished up a year at Baylor and is now attending TCU. She loves to run, read, travel, and is a gourmet cook. She is also very proud of her two older brothers who are serving their country in the Armed Forces, and sends her love to them.
More info

returns for his third show here at PlazaCo. He was previously in ARSENIC & OLD LACE portraying dual roles as Mr. Gibbs and Lt. Rooney, and in OKLAHOMA as Mr. Carnes. He has appeared in seven plays at the Artisan Theater in Hurst, most recently as Grandpa in MEET ME IN ST. LOUIS and as the harried Physiatrist in NO TIME FOR SERGEANTS. At The OnStage Theater in Bedford, he has appeared as Erronious in A FUNNY THING HAPPENED ON THE WAY TO THE FORUM and as Dr. Bradford in THE MAN WHO CAME TO DINNER. Thanks to Curt for letting him do this play and special thanks to Alieze, his wife of 42 years and also his golfing partner. If he’s not on the stage, you’ll find them out on the golf course somewhere.
More info

is honored to be joining Plaza Theatre for the first time. He has done smaller shows in school and church, but Plaza represents his biggest role to date. A chemist, Josh works for a defense contractor in Grand Prairie, where he is paid to light things on fire and be generally destructive. In his free time, he is active within his church and an avid if terrible golfer. He resides in Burleson with a dog, three cats, a fish, and two roommates. Josh would like to thank his family and friends for the support he was given throughout this production.
More info

is grateful for the opportunity to stage manage again at Plaza Theatre Company and excited to be working for the first time under the direction of Curt Mega. Recent stage managing credits include YOU'RE A GOOD MAN, CHARLIE BROWN and THE MAN WITH THE POINTED TOES at Plaza as well as SMOKE ON THE MOUNTAIN and GODSPELL at Artisan Center Theatre in Hurst. Other credits include performing as Tess in OKLAHOMA! at Plaza as well as crew positions for various shows at theatres in the DFW area. Karen would like to extend a huge thanks to her theater friends who have given her the opportunity to be a part of such a great family!
More info

is excited to be back where he calls his second home after a four-month “rest.” You may remember him as Tom in the PlazaCo premier performance of THE MAN WITH THE POINTED TOES as well as Linus in YOU'RE A GOOD MAN CHARLIE BROWN, Curly in OKLAHOMA, and Fakir in THE SECRET GARDEN. He has worked in other theaters around the DFW area in such shows as BIG RIVER, THE SCARLET PIMPERNEL, SEVEN BRIDES FOR SEVEN BROTHERS, GODSPELL, and DAMN YANKEES. He looks forward to what he feels will be a great year for Plaza Theatre Company.
More info

is honored to for the opportunity to be 'back on the boards' at Plaza. Mr. Walker was recently seen in Plaza Theatre's A CHRISTMAS CAROL as Solicitor & Mr.Topper, and is delighted to once again work with such a talented and creative cast! An award-wining theatrical sound and set designer, Russ has also worked in many roles from radio to stage. He currently resides with his beautiful wife of 17 years, their 5 children, and one Basset Hound in Southwest Fort Worth, Alpha Psi Omega.
More info