It's the Cold War inside an American embassy behind the Iron Curtain. An American tourist, a caterer by trade, and his wife and daughter rush into the embassy two steps ahead of the police who suspect them of spying and picture taking. Nevertheless, they carefully and frantically plot their escape, and the ambassador's son and the caterer's daughter even have time to fall in love. A comedy that comes in from the cold. 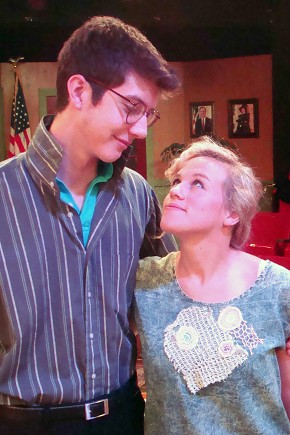 is so excited to be back on the Plaza stage! You may remember seeing her in Plaza’s production of SINGIN’ IN THE RAIN and A CHRISTMAS CAROL. Aaron Dawn has always been passionate about theatre and is now pursuing it as a career. If she’s not on the stage, you can usually find her helping out in some way or another, or sitting in her favorite chair at home and reading anything from either Edgar Allen Poe or Gregory Maguire. “I’d like to thank my parents for always being there for me, it means more to me than my words can ever express; I love y’all so much!”
More info

This is Pamela’s fourth appearance at the Plaza, playing the part of the Sultan’s wife. She was previously seen in the ensemble as a Nubian slave in the recent production of AIDA; as Frau Schmidt/nun-ensemble in THE SOUND OF MUSIC; and as the Queen of Transylvania, as well as the ensemble, in MY FAIR LADY. Pamela is re-entering the world of theatre, having taken a hiatus from the stage at area community theatres in Grapevine and Irving, and also at North Lake College in Irving, TX, and Tarrant County College in Hurst. Pamela feels humbled and excited to be a part of the Plaza Theater Family. Pamela’s hubby, Mike, thinks this is the most difficult role she has auditioned for.
More info

is a fixture here at PlazaCo. As one of the founding producers Aaron has been in all but 3 of the past 26 productions here. You may remember him as Norman in CASH ON DELIVERY, Horton the Elephant in SEUSSICAL, Ghost of Christmas Present in A CHRISTMAS CAROL, and many others. Aaron has 3 wonderful kids and his lovely wife who you may see on stage too!
More info

is appearing in his third show with the Plaza Theater Company after many performances with the Greater Cleburne Carnegie Players. In February he appeared as Harry Archer in Plaza’s wildly funny production of KISS AND TELL and this past holiday season he directed Carnegie’s critically acclaimed production of C. S. Lewis’ THE LION THE Witch AND THE WARDROBE. He is perhaps best remembered as Charlie in THE FOREIGNER and Al Lewis in THE SUNSHINE BOYS. A retired educator from Colorado, Jay lives in Cleburne with his wonderful bride, Corlis, who is terribly excited to see Jay in a show whose leading character’s name is Corliss. Besides acting, Jay is also an author having published two novels - The Cross of Lorraine and A Litany of Angels - which can be checked out at www.crossoflorraine.com. Jay would like to thank Tina, JaceSon, Aaron, and Milette as well as (of course) Millie for the opportunity to appear in another Plaza production.
More info

is back again after being on the Plaza stage as Capt. Von Trapp in THE SOUND OF MUSIC, Rev. Shaw Moore in FOOTLOOSE, Doolittle in MY FAIR LADY, and Maurice in BEAUTY AND THE BEAST. With the Cleburne Carnegie Players, Jay has enjoyed playing various roles such as Fagin, Tevye, Daddy Warbucks and King Arthur. Jay just recently directed DISNEY’S BEAUTY and the BEAST for the Carnegie Players Jay is surrounded daily by 500 kiddos as the principal of Gerard Elementary.
More info

JoAnn is the Theatre Arts teacher at Alvarado High School. She has a BFA in Theatre from University of Texas at Arlington and frequently works with both the Carnegie Players here in Cleburne and Hip Pocket Theatre in west Fort Worth. She is having a blast on stage here at Plaza for the first time. Thanks so very much, Kevin, for having me along for the ride. Thanks also to Bob – who was supposed to have a calm, relaxed wife this summer. I don’t know what her name would have been, but he stuck with me anyway.
More info

This Joy white’s second show at Plaza Theater and she is so excited to debut this fun character, Krojack! Working with Plaza and Carnegie has kept her very busy this year, not to mention working 2 jobs...But, it has been a blast! Hope you enjoy the show!
More info

Kevin is excited to be in his third production at Plaza Theatre Company. He was last seen on the Plaza stage as the mysterious Uncle George in CASH ON DELIVERY and as the evil Chief Minister Zoser in the nationally acclaimed Plaza production of AIDA! He has been a regular on and off the Carnegie stage as well. Favorite roles include Max Detweiller in SOUND OF MUSIC and Fred Gayley in MIRACLE ON 34TH STREET. His favorite productions as director for Carnegie were THE FOREIGNER and ARSENIC AND OLD LACE. In his spare time, he is principal and owner of Poole Architects, a small architectural firm in Burleson. Special thanks go to his wife Vanessa and son, Elijah, who are the “best reason I know for being me.”
More info

is making his Plaza Theatre debut but is not stranger to the theatre having been in several shows across the metroplex. including GUYS AND DOLLS with the Burleson Community Theatre URINETOWN with Tarrant County Community College and THROUGHLY MODERN MILLIE and Burleson High School. Landon had a lot more to say but I lost his bio (twice, actually) so I am just writting this from memory. I do know the answer to the most common question Landon is asked. The answer is 6 foot 7 inches.
More info

is a 2008 graduate of ACU where she earned her BFA in Theatre. Some of her favorite roles include Stella in A STREETCAR NAMED DESIRE, Audrey in AS YOU LIKE IT, and Nora in BRIGHTON BEACH MEMOIRS. She would especially like to thank the cast for making her Plaza debut such a blast, and her parents for letting her crash with them while she saves up money to move back to New York to pursue her passion.
More info

is excited to be returning to the Plaza stage after performing in the 2008 performance of THE SOUND OF MUSIC. She was last seen as Miss Preen in Carnegie’s THE MAN WHO CAME TO DINNER. She is thrilled to be in this hilarious comedy and is having a blast with the cast and crew. She would like to thank Director Kevin Poole and the Barrus and Siler families for this wonderful opportunity to play this fun character. Love to all my family, for without them I would not be where I am today. xoxo
More info

A familiar face on the Plaza stage, Mr. Walker finally gets to embrace a Woody Allen comedy! Maybe embrace is not the right term...smack it around a little, perhaps, but not embrace. Mr. Walker was recently seen trotting the boards as Jenkins in CASH ON DELIVERY, Vlad in SEUSSICAL, Bob Cratchit in A CHRISTMAS CAROL, and many others! Kudos to Poole for meshing us all together, JTAM for the vision, and my sweet family for putting up with me! Oh, and QT for the 49 cent drinks that keep me awake enough to drive home! (Alpha Psi Omega)
More info

is thrilled to be making her debut at The Plaza Theatre! Some of her previous roles include Wendy in PETER PAN, Mylynn in STEEL MAGNOLIAS, and Lily in THE MEDICINE MAN. She will also be performing as Puck in Shakespeare’s A MIDSUMMER NIGHT’S DREAM with the Carnegie Players later this season. She would like to thank Kevin and the fantastic cast and crew of DON’T DRINK THE WATER for making this such an enjoyable show. She would also like to thank her awesome family and friends for their endless love and encouragement. I love you guys! Enjoy the show!
More info