Over the River and Through the Woods

Meet Nick Cristano, a slightly smothered 29 year old Italian-American boy who is about to leave his Hoboken, NJ roots behind to take a job across the country. Throw in Nick's overprotective, well meaning family and anyone who has ever had to sit through a family dinner will enjoy the results. Over the River and Through the Woods is a hilariously charming comedy that will have you calling home afterwards. 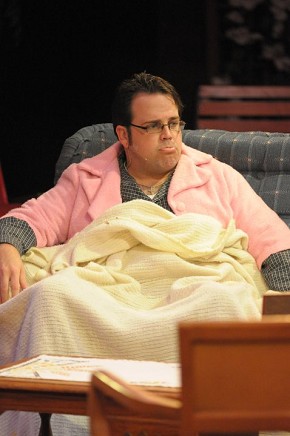 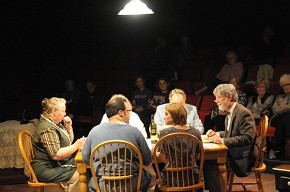 This is Aaron's 15th appearance in the Plaza Co venue and he has enjoyed this production mayhaps more than any other! Aaron was recently spotted portraying 7 characters in BULLSHOT CRUMMOND at OnStage in Bedford, as the florist Richard in Artisan Circle Theatre's production of NUPTIALS, as Sheriff Earl in PlazaCo's ALL SHOOK UP, and as John Adams in Carnegie's 1776 (one of his personal favorites). He was nominated for a Best Actor Award at this years Column Awards for his role of Eric Swan in PlazaCo's production of CASH ON DELIVERY. Aaron holds a BFA in Theatre from Tarleton State University and is using that degree fully as a Contract Web Developer for Orthofix Corporation in The Colony. Some favorite roles include but are not limited to: John Adams in 1776, Sancho Panza in MAN OF LA MANCHA, Eric Swan in CASH ON DELIVERY, Chance in GHOST OF A CHANCE, and Hajj (The Poet) in KISMET. "What an enchanting experience it is to share the stage with one that leaves you twitter-pated...."
More info

Annalee is thrilled to be appearing in her first Plaza production, and looks forward to sharing the stage with so many talented actors! She is a senior at the Travis Academy of Fine Arts (TAFA) where she has had the privilege to perform in the academy's yearly Musical Extravaganza. Her past roles include Christine in THE PHANTOM OF THE OPERA, Liesl in THE SOUND OF MUSIC, Truly Scrumptious in CHITTY CHITTY BANG BANG, and Golde in THE FIDDLER ON THE ROOF, all of which were performed at TAFA. She would like to give a special thanks to her fellow actor and long time friend, Andrew Guzman, for the many hours he's dedicated-and the many miles he's driven-to help her with her first production!
More info

is a retired teacher, retired USAF pilot and Vietnam veteran. He has received numerous acting awards from various DFW theatrical organizations and European-American Forces Theater. He is a producer and actor in independent TV, commercial films/videos and dinner theater and has performed in sixteen different North Texas theaters. This is Burl's first appearance at Plaza but, hopefully, not his last, and is grateful to be among such talented people in such a truly exciting production company. Some of Burl's favorite roles include Nunzio in OVER THE RIVER AND THROUGH THE WOODS, Henry Drummond in INHERIT THE WIND, Julian Nortrup in ON BORROWED TIME, Atticus Finch in TO KILL A MOCKINGBIRD, The Proprietor in ASSASSINS, Mr. Mushnik in LITTLE SHOP OF HORROS, Gov. Danforth in THE CRUCIBLE, Kris Kringle in MIRACLE ON 34th STREET, Martin Vanderhof in YOU CAN'T TAKE IT WITH YOU, Judge Turpin in SWEENY TODD, Benjamin Franklin in 1776 and The King in BIG RIVER.
More info

Dick has worked with Carnegie on 52 productions and this is his sixth production with PTC. Dick has been actor, director, music and orchestra director, techie, backstage and off stage. His work on AIDA won him the 2009 Column Award as Outstanding Music Director, non-equity show. Dick lists his favorite directorial jobs as CAT ON A HOT TIN ROOF, SYLVIA, and MIRACLE WORKER. His favorite music directing jobs are AIDA, MAN OF LA MANCHA, and 1776. His favorite musical roles are Fagin in OLIVER, Rutledge in 1776, Harold Hill in MUSIC MAN and Pharoah in JOSEPH.....DREAMCOAT. His favorite nonmusical roles are George in MOON OVER BUFFALO, Artie in HOUSE OF BLUE LEAVES, David in TO GILLIAN....BIRTHDAY and Grandpa in YOU CAN'T TAKE IT WITH YOU. He expects Frank in OVER THE RIVER AND THROUGH THE WOODS to be up there next. Dick wants to thank his wife of 47 years, Patsy, his kids and grandkids for their love and support. Thanks also to this wonderful cast, Kevin and the producers of PTC.
More info

Jill is very honored to be a part of her first Plaza production! She was most recently seen as Rosemary in BULLSHOT CRUMMOND at Onstage in Bedford. Some of her favorite roles have been Gwen/Debbie in FOOTLIGHT FRENZY and DUCKHUNTER SHOOTS ANGEL. Other credits include WE LOVE YOU, DORIS DAY; UNDER THE YUM YUM TREE; and THE MAKEOVER at Runway Theatre. Special thanks to Kevin for allowing her to join this cast and to the cast/crew for all the laughs. Big thanks to her family and friends who continually come out to support her!
More info

is honored to again be performing with Plaza Theater & this incredible cast! She was last seen as Alma Hix in THE MUSIC MAN, Louise the maid in KISS & TELL, and as a Nun in SOUND OF MUSIC. Julie considers her starring role as "Nana" to her most adorable first grandchild – Zachary, “Mom” to Benjamin, Nicholas, Heather, Nathaniel, & Becki, and wife to her husband of almost 20 years, James, to be the absolute best part of her life! And, she thinks it’s awesome to be ‘married’ to Dick Helmcamp for the 3rd time! (Oops! – did she just say that?!) Julie is an R.N. - Admin. Supervisor at Texas Health-Cleburne. JaceSon & Tina Barrus, & Aaron & Milette Siler (and their families) have, once again, given of themselves to make family entertainment in Cleburne a reality. Thank you, Kevin Poole (Director) for putting up with our craziness, and Analaura Keith (Stage Manager) for being the all-around best person you are! Then, the props, and the food, and … "Everything came beautiful..."
More info

Shauna is happy to be back on Plaza's stage after last being seen as Granny in Into The Woods. Previous favorite roles include Ouiser in STEEL MAGNOLIAS and the Wicked Witch in THE WIZARD OF OZ. Thank you for supporting community theatre! Love to kiddos John, Kathleen, Garrett, Emma and Lorelei. Hey Jaybird, let's have cannolis! Tengo famiglia!!!
More info

Trich, as Emma Cristano, is thrilled to be back at Plaza. She is so excited to be able to be on stage with this extraordinary cast and crew. Last seen at Plaza as Truvy in STEEL MAGNOLIAS. Trich works in theaters all over the Metroplex and is represented by Linda McAlister Talent. She, along with business partner Cindy Almond, have their own production company, A to Z Girls Productions. Their last production was this summer's production of NUNSENSATIONS-THE LAS VEGAS REVIEW which ran at the Texas Theatre in Waxahachie. Trich would like to thank the residents of Cleburne and surrounding communities for the love and support of this wonderful Plaza Theatre. She would also like to thank husband Al for caring for the llamas so she could be a part of of this show. A very special thank you to Kevin and the Barrus/Siler families for making this "Beautiful".
More info

She is excited to be back with Plaza Theatre Company as the stage manager of this great show. She has recently been SM for DRACULA for Cleburne Carnegie Players. Other shows include SEVEN BRIDES FOR SEVEN BROTHERS, INTO THE WOODS with PTC. She is attending her last semester at Hill College before going to North Carolina to farther her education in theatre. Would like to thank Kevin allowing her to be the stage manager of this show. She would also like to thank JTMA for all that they have done for her this last few years, it has been a blasted to work with all of you. Thanks to all my family and friends that have stood by her in everything she does.
More info

Kevin is excited to be back at Plaza Theatre Company after a brief period away. His favorite Plaza roles include Uncle George in CASH ON DELIVERY and the evil Chief Minister Zoser in AIDA. Directing credits include NUPTIALS at Artisan, DON’T DRINK THE WATER at Plaza, THE FOREIGNER, and ARSENIC AND OLD LACE at greater Cleburne Carnegie Players. In his spare time, he is a substitute teacher for Burleson ISD. First and foremost, thanks go to his wife Vanessa and son, Elijah, who are the “best reasons I know for being me.” He also wishes to express his gratitude to this hard-working, talented cast and crew. Thanks also go to the Barrus/Siler families for just being them. "Tengo famiglia!"
More info