This classic play is a farcical black comedy revolving around Mortimer Brewster, a drama critic who must deal with his crazy, homicidal family and local police in Brooklyn, NY, as he debates whether to go through with his recent promise to marry the woman he loves. His family includes two spinster aunts who have taken to murdering lonely old men by poisoning them with a glass of home-made elderberry wine laced with arsenic, strychnine, and "just a pinch" of cyanide; a brother who believes he is Teddy Roosevelt, and a murderous brother who has received plastic surgery performed by an alcoholic accomplice, Dr. Einstein. Because of this streak of insanity in his family, Mortimer believes he musn't marry and carry on the family line, until a late reprieve saves the day. A lively comic masterpiece. 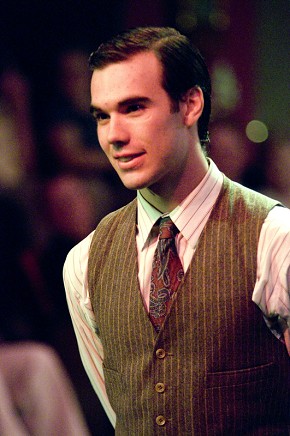 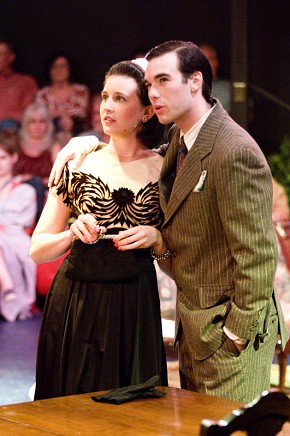 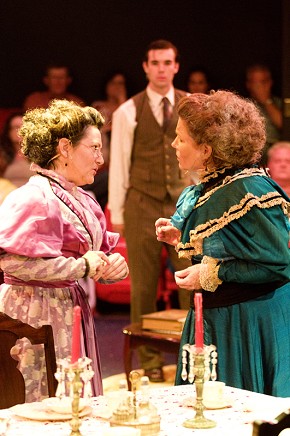 is excited to be back on the Plaza stage. Previous PlazaCo roles include Mrs. Chumley in HARVEY, Mary Read in TREASURE ISLAND, and Marion Hollander in DON'T DRINK THE WATER. JoAnn spends her days teaching theatre to some of the most talented kids around at Alvarado High School. A few of her favorite shows include: BOG OF CATS, MY NAME IS RACHEL CORRIE, and last year's one act - THE MADWOMAN OF CHAILLOT. She is grateful to her students for their dedication and encouragement. And thankful that her husband, Bob, loves to cook.
More info

After graduating with a BA and MA in theatre, Katy Wood spent many years teaching and directing theatre for schools and churches. She first set foot on the PlazaCo stage as Veta , in HARVEY. After that she was hooked on PlazaCo! She played Cordelia Drexel-Biddle in THE HAPPIEST MILLIONAIRE, and now she’s having a blast playing one of the crazy Brewster sisters. “Thank you to the cast and crew of ARSENIC. You are all generous, collaborative actors. And especially to Joann, we finally get to act together! I wouldn’t be able to do this without my sweet husband, Scott, who has picked up the kids for me, cooked for me, and run lines with me, so that I can pursue my crazy passion. I love you.”
More info

This is another one of Stephen's numerous appearances at Plaza and he's thrilled to be working with Ben Phillips for the first time. Favorite shows include WEST SIDE STORY, 7 BRIDES, BEAUTY AND THE BEAST, and many more. The last he was seen here at Plaza was a featured dancer/ Bickle in FOOTLOOSE, and before that the same role in JOSEPH...DREAMCOAT. Stephen is studying music composition at UTA and takes dance classes in Arlington. Thank you to my Family for loving me and being there always, And thank you to Jesus Christ because without Him none of this is possible.
More info

This is Michael's premiere role with PlazaCo. He recently completed his Theatre Arts studies at Texas Wesleyan University, where he was active both onstage and off. Some of his acting roles there included: The Actor in THE WOMAN IN BLACK, Ariel in THE PILLOWMAN, Mitch in 25TH ANNUAL... SPELLING BEE, Spettigue in CHARLEY'S AUNT, and Tony in the NYC reading of LYCANTHROPE. Michael is currently also in Stage West's children's show A KITE'S TALE (which features some of his music compositions). In other DFW area theaters, he has played such roles as: File in THE RAINMAKER, Jesus in JESUS CHRIST SUPERSTAR, and Creon in ANTIGONE. Michael became a published & internationally produced playwright with his 10 minute play CLOTHES FOR THEIR SOULS. Michael Rudd is a recipient of the TWU Cecil Cole Memorial Award, a member of Alpha Psi Omega, and a member of the Dramatists Guild of America. "A huge thanks to my friends and family, for their years of support and love, and to my Creator."
More info

Tyler is honored to perform again on the Plaza stage with such a great cast and crew. There is something special about the Plaza "experience"! In 2011 he appeared as Oliver Warbucks in ANNIE in his first role at PlazaCo. Fearing typecasting (bald head?) was kicking in after appearing in the same role in ANNIE the previous year at Artisan Center Theater, he felt it was time to branch out. Playing a drunk doctor seemed perfect! Past roles include: Col. Pickering in MY FAIR LADY at Artisan, Narrator in THE FORGOTTEN CAROLS at Artisan, and Ebenezeer Scrooge in A CHRISTMAS CAROL: THE MUSICAL. Tyler thanks God for his many blessings, his family for their love, and his wife Canda for her never-ceasing love and encouragement!
More info

Sara Blair is proud to debut at Plaza Theater in Arsenic and Old Lace. Sara is currently earning her bachelors in the arts for theater at Texas Wesleyan University in Fort Worth, Texas. Her most recent role was Fraulein Kost in CABERET, where she earned the award for best Actress in a Musical her first semester at Wesleyan. She has also performed in URINTOWN, ANNIE GET YOUR GUN, and MUSICAL COMEDY MURDERS OF THE 1940'S. Ms. Blair aspires to do voice work for animated movies and series, along with pursuing a career in children’s theater. Sara also teaches early childhood development in Southlake, Texas. i.e. "Thank you to everyone who has believed in me and told me to follow my dreams. I want to thank my Papa for helping leading me to Christ and showing me how to never give up. You will always be my hero!”
More info

is excited to back on the Plaza stage. You may remember him as the boxer in THE HAPPIEST MILLIONAIRE or as Owen in THE FOREIGNER. Michael has been involved in several college and church productions, spanning over almost 20 years. Some of his more memorable roles have been The Lion in ANDORCLES AND THE LION, Chief Bromden in ONE FLEW OVER THE CUCKOO'S NEST, and Brocker Slade in THE WAKE OF JAMEY FOSTER. He has also received Excellence Awards from Texas Junior College Theater Festival for sound design in CAT ON A HOT TIN ROOF, and as Carlson in OF MICE AND MEN.
More info

Luke is performing in his sixteenth production at PlazaCo having previously appeared as Long John Silver in TREASURE ISLAND,  Froggy LeSeuer in THE FOREIGNER, Anthony Drexel Biddle in THE HAPPIEST MILLIONAIRE, and most recently as himself and a few other people in THE COMPLEAT WORKS OF WILLIAM SHAKESPEARE (ABRIDGED). He has also acted with the Granbury Theatre Company as John Dickinson in 1776 and locally with the Carnegie Players as Aslan in LION...WARDROBE, Count Dracula in DRACULA, and Thomas Jefferson in 1776. Luke is the theatre teacher at Alvarado Junior High School and is a co-owner of Dance Across Cleburne with his wife, Rachel.
More info

Jay Cornils (Dr. Harper, Gibbs, Witherspoon) since his first appearance on stage in Johnson County in the Carnegie Players 2005 production of SOUTH PACIFIC, Jay is now appearing in his thirtieth play here in Texas. Obviously the list is long and include fan favorites such as Elwood P Dowd in HARVEY, Abe Goldman in BEAU JEST, and Al Lewis in THE SUNSHINE BOYS, to name just a few. A retired educator from Colorado, Jay now enjoys life here in Cleburne with his lovely and supportive wife Corlis.
More info

is excited to be back on the Plaza Stage. John's first production with PlazaCo was in Footloose as Coach Dunbar. Some of his favorite previous performances include Carnegie Player's CAMELOT, OLIVER, LIL ABNER, and PAINT YOUR WAGON. "I love poetry, and a glass of scotch, and of course, my friend Baxter here."
More info

Taking the stage for his second time at Plaza Theater Company, Nathan is glad to be back for this fantastic presentation of comedy. In his last role as Liver Lips Louie in the musical GUYS AND DOLLS at Plaza Theater Company, he was running from the cops and now he must become one as Officer Brophy. Nathan has enjoyed his time with his cast and director and hopes to be seen in more productions in the months to come.
More info

Amy Wolff Sorter makes her Plaza Theatre debut with ARSENIC AND OLD LACE, and is happy to be "trodding the boards" after a hiatus of many years. Born and raised in Chicago, Amy was active both in front of the lights and behind the scenes in the Windy City's theater community. Her acting experience includes the roles of Inez in NO EXIT at Victory Garden Studio Theatre; Millie in PLAZA SUITE and Charlotte in BEYOND THERAPY, both performed at Reflections Theatre. Her directorial credits include WAITING FOR THE PARADE and THE WOOLGATHERERS. Amy is also an accomplished playwright; her play THREE SEASONS opened to critical acclaim in Chicago. In addition to her "hands on" theater experience, Amy has reviewed hundreds of theater productions for newspapers in Chicago, Rhode Island, Massachusetts and Texas. Amy wants to give a shout-out to her wonderful husband Dave, and her terrific son Michael -- "thanks for your love and support!"
More info

Ben Phillips has previously appeared at Plaza Theatre Company as Nathan Detroit in GUYS AND DOLLS, Aldolpho in THE DROWSY CHAPERONE, Citizen Chauvelin in THE SCARLET PIMPERNEL, and the Baker in INTO THE WOODS (2011 Column Award winner). This is Ben's first time directing for us here at PlazaCo and other than forgetting to turn in his bio on time we are please as punch (hold the Arsenic please). Ben's voice can be heard in such animated series as MURDER PRINCESS, FULLMETAL ALCHEMIST: BROTHERHOOD, HEROIC AGE, and ONE PIECE from FUNimation Entertainment.
More info

There are some people who like to write their bios to help out the guy that puts this lovely program together and then there is Emily. You may remember seeing Emily as Miss Sarah Brown in GUYS AND DOLLS or Betty Blast and the country singer in FOOTLOOSE but tonight she will be managing the show by making sure the actors get ready on time and run the light/sound board. If the lights flicker during the show make sure you all turn your heads and stare at her up in the light booth. She loves it when you do that!
More info