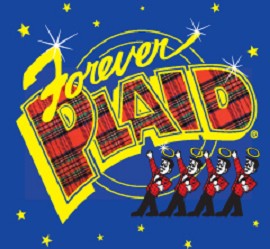 On their way to their first big concert, a singing quartet of young men - The Plaids - are killed in a car accident. Due to the alignment of space and time, The Plaids are able to return to Earth for one final concert. In between telling the stories of their lives, The Plaids perform some of the greatest hits from the 1950s including "Three Coins in a Fountain", "Shangri-La", "Crazy 'bout Ya Baby" and "Love Is A Many Splendoured Thing". Once they've performed their one great show, The Plaid's happily resume their journey back to Heaven.

Andrew Guzman is thrilled to be back on the Plaza stage in Forever Plaid!!! Some of Andrew's favorite roles include: Angier Duke from MILLIONAIRE, Perchik from FIDDLER, Joseph from DREAMCOAT, Jose from POINTED TOES, among others.
More info

Andrew is honored to make FOREVER PLAID his debut appearance with the Plaza Theatre Company; the show's signature four-part men's harmony sound makes him reminisce about his days in Barbershop Quartet in high school and Men's Glee Club in college. He has recently appeared on stage with Family Music Theatre at Cedar Valley College as Officer Pitman/The Major in TITANIC, Mr. Gloop in WILLY WONKA, Passarino/Chorus Captain in THE PHANTOM OF THE OPERA, and Mr. Bixby in SEVEN BRIDES FOR SEVEN BROTHERS. Andrew, a graduate of the University of Kansas (Rock Chalk Jayhawk!), is a Texas Transplant in his fourth year as choir director at Frank Seale Middle School in Midlothian, TX. He also "moonlights" as choir director at Hope Lutheran Church in Cedar Hill, TX. "Thanks to Megan, Kyle, and our esteemed producers for the opportunity to sing such great harmonies with this talented cast!"
More info

Kyle is excited to be returning to the Plaza stage after a long hiatus during which he was establishing a family with his beautiful wife and new addition, baby Zoë! He is privileged to have been a part of the very first Plaza production of Man with the Pointed Toes in the makeshift theater at the Putt Putt. Since then he has been able to share many performances and milestones with Plaza such as performing in the opening show of the brand new theater back in 2008. His shows include Charlie Brown (Linus), Oklahoma! (Curly), Man With The Pointed Toes (Tom, Lem), The Secret Garden (Fakir), See How They Run (Clive), Smoke on the Mountain (Oglethorpe), Aida (Radames), Singin in the Rain (Don Lockwood), Beau Jest (Dave-Bob), Thoroughly Modern Millie (Jimmy), Into the Woods (Repunzel's Prince). He would like to thank team JTAM for his first directorial opportunity with Megan, and, of course, the guys for making it an overall pleasant experience! Here come the Plaids!
More info

This is a year of firsts for Matt-performing in his first production, learning to sing harmony, and being a Plaid; his most favorite thing!! Matt loves playing the guitar, leading worship at church and has enjoyed the friendships he has made during Forever Plaid. Matt would like to thank his family and friends for their amazing support and would also like to express his love for his Lord and Savior. Plaid life Rocks!!!
More info

Kyle and Megan have appeared on stage together and separately since they met in 2009, and are so excited to present to you their first directorial endeavor. While Megan is an old directorial pro, having taught high school and middle school theater for the past 7 years in Anna, Texas, GPISD, and now StoneGate Christian Academy, this is their directorial debut as a team. They would like to thank the guys for their enthusiasm and spirit which has made this a great first experience! They are excited to bring to you their first show and hope to have many more in the future. Go Team Adams!
More info

Cheri is honored to have been a part of Plaza Theatre from its inception and is so excited to see its growth into the flourishing organization it has become. She has been the music director for many productions here, including all of the SMOKE productions and she even tried her hand at acting as the Mother Abbess in THE SOUND OF MUSIC. She is grateful to her son, Curt, for getting her addicted to this theater hobby and to her husband, Brian, for his patience in enduring it. "JaceSon, Tina, Aaron and Milette; I'm so grateful to know you all and I am thankful for the opportunities you've given me here. I pray for your continued success." "Thank you to Kyle and Megan and Zoe for the rides and fun in the car on the way." "Thank you to my Lord, Jesus for life and family and friends. All glory be to Him."
More info

We are glad to have Mike back again for FOREVER PLAID. You may recognize Mike since he has played with the Sanders Family for the past two productions of the SMOKE ON THE MOUNTAIN series. He and his wife moved to Burleson in May 2008. Before that, he was a band director, private instrumental instructor and performer in the SW Houston area. He is a multi-instrumentalist trained in classical and jazz. For his last seven years in Houston, he was the electric/acoustic bassist, tubist and associate conductor for The Masquerade Theatre, resident company in the Hobby Center in downtown Houston. Currently, he teaches flute, clarinet, saxophone, oboe, bassoon, trombone, euphonium, tuba and electric bass in Crowley and Forney ISDs, and the German Band of North Texas on oboe/English horn and flute. He is also a faculty member of Mountain Valley Studios in Joshua, teaching woodwinds and brasses.
More info

has been in a few shows here at Plaza. You may remember him as Willard Hewitt in our recent production of FOOTLOOSE or as Frank Gilbreth in CHEAPER BY THE DOZEN. He has also played as Raymond in KISS AND TELL, The Washing Machine in CASH ON DELIVERY, Fredrich in SOUND OF MUSIC, and Collin in THE SECRET GARDEN. Several years ago he also played Ruby Sideburns in the Lolly-Pup's Roundup show BLACKBEARDS BIRTHDAY BASH. Park is an inventor (better keep an eye on the blue tape) and a professional big brother. He sends loves to Tabby, Cam, Edie, Mimi, and JJ.
More info

Even though Cameron has done MANY things here at Plaza this is his first time to be a stage manager. Cameron recently played in FOOTLOOSE as 'Tag-A-Long Kid' Other past performances include Nelson in ANNIE GET YOUR GUN, Sling shot boy in SEVEN BRIDES FOR SEVEN BROTHER, WILL ROGERS FOLLIES As James Rogers BEAUTY AND THE BEAST as Chip, A CHRISTMAS CAROL as Fredrick, and SEUSSICAL THE MUSICAL as a Who. in his spare time Cameron likes to design lights and play with Photoshop.
More info