Breaking Up Is Hard To Do

Featuring the songs of Neil Sedaka

Set at a Catskills resort in 1960, this is the sweetly comic story of Lois and Marge, two friends from Brooklyn in search of good times and romance over one wild Labor Day weekend. The score showcases 18 Neil Sedaka classics, including "Where the Boys Are", "Sweet Sixteen", "Calendar Girl", "Love Will Keep Us Together", and of course, the chart-topping title song. 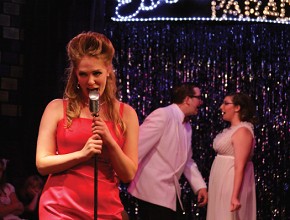 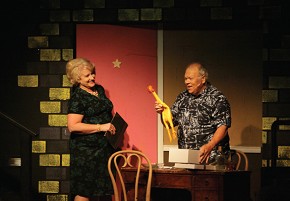 Caitlan is thrilled to be back on the Plaza Theatre Co. stage! Some of her favorite roles at PTC include, Wardrobe in BEAUTY…BEAST, Narrator in JOSEPH…DREAMCOAT, Irene/Follies Girl in CRAZY FOR YOU, Chaperone/Trix in THE DROWSY CHAPERONE, Heidi in [title of show], and Rose in BYE, BYE BIRDIE. Caitlan has also performed with the Granbury Theatre Company in GODSPELL, A CHRISTMAS CAROL (Mrs. Cratchitt), and LITTLE WOMEN (Marmee). Other favorite roles include Sour Kangaroo (SEUSSICAL), Mme. Dubonet (THE BOYFRIEND), and Muzzy THOROUGHLY...MILLIE). She was a member of Kids Who Care for 5 years and performed with them at Disney World and off - Broadway. Caitlan graduated from TCU with a Bachelor's degree in education. She sang with the TCU Concert Chorale and performed with them at Carnegie Hall in New York City. Caitlan teaches theatre arts at Granbury Middle School. She would like to thank her “fetching” husband, Josh, for always supporting her and sharing the stage and her crazy theatre bug!
More info

Carlee is excited to be back at PlazaCo for her second show! You may remember her as Lois Lane in KISS ME KATE a few months ago. She holds a BFA in Theatre from Abilene Christian University. You may have seen her recently in Lyric Stage's DESERT SONG, NINE, THE SOUND OF MUSIC, or TOO MANY GIRLS. Some of Carlee's favorite roles include Lucille in PARADE, Agnes in I DO! I DO!, Marmee in LITTLE WOMEN, Alice Beane in TITANIC and Muzzy in THOROUGHLY MODERN MILLIE. Carlee would like to thank her friends and family for their support, Aaron Siler and the Plaza staff for the opportunity, and above all, God, who is the provider and sustainer of all of her abilities. Enjoy the show!
More info

Josh is excited to return to the Plaza Theatre Co. stage! Some of his favorite roles at PTC include Albert in BYE, BYE BIRDIE, a quick step-in run as a gangster in DROWSY CHAPERONE, Bert Healy in ANNIE, Mingo in CRAZY FOR YOU and Levi in JOSEPH...DREAMCOAT. Josh has also performed with Granbury Theatre Co. John the Baptist/Judah in GODSPELL, Charles Dickens in A CHRISTMAS CAROL, and Professor Bhaer in LITTLE WOMEN with GTC. Other shows include OKLAHOMA!, NO, NO NANETTE, and WIZARD OF OZ at Birdville HS, as well as THE BEST CHRISTMAS PAGEANT EVER, GET FOUND KID, and CHOICES at the Scott Theatre. He was a member of Kids Who Care for two years and performed with them off-Broadway. He would like to thank God and his loving wife for always believing in him.
More info

David Goza is excited to be a part of BREAKING UP IS HARD TO DO. This will be his 8th show at plaza, and he is looking forward to doing many more shows with The Plaza Theatre Company. David feels truly blessed to be working with such a vastly talented cast, and thankful for the help and encouragement everyone in the cast has given to him. He wants to give a special thank you to Doug Henry and Aaron Siler for giving him this opportunity, and Kathy Lemons for sacrificing her free time to work with him. Out of the 8 shows he has been a part of at Plaza, this is the first Biography he has written and, well he is not entirely sure how to end it. So he will leave you with … Love, Peace, and Chicken Grease!
More info

In the summer season of 1985, Doug professionally performed in several of the nightclubs or “showrooms,” as many were called, in New York’s famous “borscht circuit.” He was a member of a headline act of six men known as the WINGED VICTORY SINGERS. The hotels, Kutsher’s, Brown’s, Stevensville, Grossinger & Brickman, where he performed, were huge layouts with nicely furnished showrooms for a 1000 or more people. Each had their own “house” band. People from NYC and other NE cities would visit these cooler climate locations in the summer to escape the heat. As Doug put it, “the clubs were packed.” Historically, many a famous entertainer would perform at these nightclubs to “try out” new material or just for work when their calendars permitted. Sad to say, the borscht circuit is now a thing of the past. Doug’s professional theatrical experience also includes lead & supporting roles in several productions in Kansas, New York and in Texas as well as several community theatre roles at PTC, the last being General Waverly in WHITE CHRISTMAS. (Psalms 103:1-5)
More info

This is Kathy’s fourth time to be part of the wonderful PlazaCo family. Previously she played Nimue in CAMELOT, Mrs. Peacock in CLUE THE MUSICAL and Mother Abbess in SOUND OF MUSIC. She has also worked with Grand Prairie Arts Council as Sophie/Annette/Frances Perkins in ANNIE, Vi Moore in FOOTLOOSE, Mistress Mary in Babes in Toyland, and Lena Astor in the dinner theater production ofWedding Bells Blues. Some of her other favorites from the past include roles in The Unsinkable Molly Brown, Music Man, I Never Saw Another Butterfly, The Lottery, Tom Jones, and Show Boat. Kathy graduated from Howard Payne University where she was a vocal performance major. She has recorded one album of sacred music, has sung with the Dallas Symphony Chorus, and continues to work as a concert vocalist. She would like to thank Aaron Siler for allowing her to share the stage with this talented cast. As always, “My love to Jim for keeping a song in my heart…of course now it’s a Neil Sedaka song.”
More info

ROBERTO ANTONIO EL POLLO
(as Himself)

Roberto (pronounced Rrrro-berrrr-to) is so happy to be in his first Plaza Theatre show. He is looking forward to many more opportunities to work at Plaza…and someday even earning his very own 20th show Plaza robe (mainly because he is rather chilly after that plucking incident in his past). Roberto likes starting anew, being called Angel Face, waiting impatiently, actin' like a lovesick fool, playing solitaire, laughing in the rain, Betty Grable, and believes that love will keep us together indeed. He would like thank Aaron Siler for taking him away from Col. Sanders and giving him the chance to work with this cast of talented humans. Roberto’s new favorite quote is by Muhammad Ali, “A rooster crows only when it sees the light. Put him in the dark and he’ll never crow. I have seen the light and I’m crowing.”
More info

Stefanie is honored to be designing costumes for this show. Previous work includes LA CAGE AUX FOLLES, A MIDSUMMER NIGHTS DREAM, EMMA, THE IMPORTANCE OF BEING EARNEST and Monty Python's SPAMALOT. Stefanie won THE 2014 Column Award for Best Costume Design of a Musical-Non Equity for her work on SPAMALOT. Lots of love to her family!
More info

Tammie would like to thank her family and friends for always loving and supporting her through the good times and the bad times. She knows that she would not be where she is today without them by her side. Tammie considers the role of "Prop Momma" to be a huge blessing from God and is grateful that He allows her to use the creative gifts to serve in the midst of our DFW community theatre world!
More info

Dana has been on the PlazaCo stage several times in shows such as CHEAPER BY THE DOZEN as Ernestine, A CHRISTMAS CAROL as Letucua Fezziwig and others. Dana just graduate from Cleburne High School and is starting college in the fall. She also enjoys listening to music and making brownies for her brothers Ryan and Mitch. Did I mention that she is the daughter to PlazaCo producers Aaron and Milette Siler? Yep, she's that too!.
More info