When two frustrated London housewives decide to rent a villa in Italy for a holiday, they recruit two very different English women to share the cost and the experience. There, among the blossoms and sunshine, all four flourish again in ways each never expected.

By Matthew Barber
From the novel by Elizabeth von Arnim 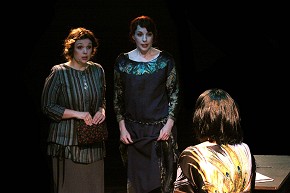 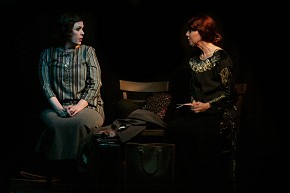 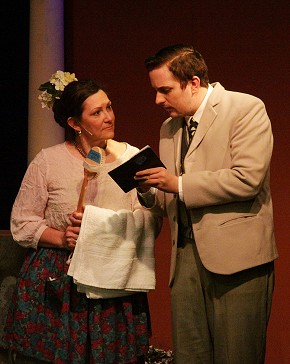 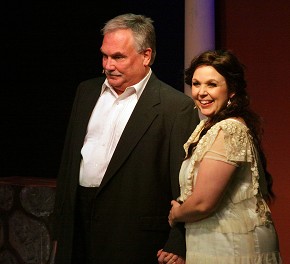 Stacey is deeply honored and humbled to appear with such an amazing cast in her 14th show at PTC. Favorite roles include The Detective in CLUE THE MUSICAL, Jolene in DIRTY ROTTEN SCOUNDRELS, Ethel McCormack in FOOTLOOSE, Clairee in STEEL MAGNOLIAS, and both Yente and Fruma-Sarah in two different productions of FIDDLER ON THE ROOF. She's also a 2014 Column Award nominee for her costuming work. Stacey is a theatre and choral nerd who's been singing and performing for thirty years on various stages--cedar chests, school cafeterias, backyard monkey bars, gymnasiums, football fields, churches, auditoriums, showers, and... well, theatres. When she's not costuming, rehearsing, performing, or hanging with her very talented friends, Stacey is a busy Supported Employment Specialist with Goodwill. She's also an accomplished artist, professional photographer, published author, mom to two truly fabulous kids (love you guys!), and shower show-tune diva extraordinaire.
More info

Jonathan is just two Plaza shows away from receiving his 20-Show Robe! He was recently honored with a 2014 Column Award for his portrayal of Albert Klummer in Plaza's DEAR RUTH, and he's thrilled to be doing another straight play. His most recent performances on the PTC stage include Bill Calhoun in KISS ME, KATE, Lun Tha in THE KING AND I, and Phil Davis in WHITE CHRISTMAS. A few of his many favorite roles include Reverend Oglethorpe in SMOKE ON THE MOUNTAIN, Younger Brother in RAGTIME, Barrett in TITANIC, and Laurie in LITTLE WOMEN. "Special thanks to Mom, Dad, and little P for putting up with my crazy schedule."
More info

Every once in a while, Tina gets a chance to come out from behind the sewing machine to appear on stage. Past favorite roles include Lena Lamont in SINGIN' IN THE RAIN, Lily St. Regis in ANNIE, Adelaide in GUYS & DOLLS and Florence in THE MAN WITH THE POINTED TOES for which she won the 2012 Column Award for Best Actress in a (non-Equity) Play. She is also the beloved mother of six beautiful children and wife to one lucky husband to whom she means the world. In her spare time she likes to...oh, who are we kidding, costumes and kiddos are her life.
More info

JAY LEWIS most recent endeavors with Plaza have included WHITE CHRISTMAS, Col. Mustard in CLUE, a prisoner in MAN OF LA MANCHA,, Rev. Moore in FOOTLOOSE and directing GUYS AND DOLLS and CRAZY FOR YOU. Jay is also involved with Cleburne's Carnegie Players having recently portrayed Huckabee in THE FANTASTICKS and Tevye in FIDDLER ON THE ROOF this past summer. He will direct TITANIC, the Musical this summer. Favorite roles include Tevye, FOTR; Arthur, CAMELOT; Horace VanderGelder, HELLO DOLLY; Daddy Warbucks, ANNIE; and Ben Franklin, 1776. Kisses, a dozen roses and a standing ovation for his supporting wife, Shauna
More info

Jennifer is delighted to return to the Plaza stage! She was most recently seen as Catherine in PROOF at OnStage in Bedford, for which she was nominated for a Column Award. Other favorite credits include Catherine in THE FOREIGNER at PTC, Audrey in FARNDALE AVENUE...MURDER MYSTERY at Pantaglieze, Sarah in CHILDREN OF A LESSER GOD at SFASU, and her daily role as a theatre teacher to 5th & 6th grade students in west Fort Worth. Jenn thanks JaceSon for the opportunity to be part of such a talented cast and tell such a beautiful story.
More info

Michael McMillan is excited to be returning to the Plaza Theatre stage, having first appeared as Sancho in MAN OF LA MANCHA! Michael graduated from Baylor University with a B.A. in Theatre Arts and Music in December 2012. Since moving to the Metroplex, Michael has been seen in A BRIGHT NEW BOISE at Circle Theatre, A MIDSUMMER NIGHT'S DREAM with Shakespeare Dallas, DROOD at PFamily Arts, and THE RIVALS at Stage West. "Thank you to Plaza Theatre for letting me be part of this wonderful story!"
More info

Trich is so very happy to be back to where she calls "Home". She was last scene as Mae Peterson in BYE BYE BIRDIIE. Some of her favorite rolls are Emma in OVER THE RIVER AND THROUGH THE WOODS, Betty in THE FOREIGNER and Aunt Mary in THE HAPPIEST MILLIONAIRE, for which she won a Column Award for her performance. She is beginning to think she is being typed cast as a women of certain age and temperament. She thinks her family would agree with that. Trich is represented by the Linda Talent Agency. But, she will tell you that her best and most extraordinary roll to date is that of grandmother to her twin granddaughters. She would like to thank the citizens of Cleburne for their wonderful support for live theatre.
More info

is excited to be back on the Plaza stage. Previous PlazaCo roles include Abby Brewster in ARSENIC AND OLD LACE, Mary Reed in TREASURE ISLAND, and Marion Hollander in DON'T DRINK THE WATER. JoAnn spent the last few years teaching theatre to some of the most talented kids around at Alvarado High School. A few of her favorite shows there include: BOG OF CATS, MY NAME IS RACHEL CORRIE, A CHRISTMAS CAROL, and SEUSSICAL, THE MUSICAL. She spends a good bit of her summers Stage Managing out at Hip Pocket Theatre. She is very grateful that she didn't have to write this bio in Italian. Grazie per tutte le vostre gentilezze.
More info

As Artistic Director at PlazaCo, JaceSon has many opportunities to direct Plaza shows. Recent favorites include CASH ON DELIVERY, WHITE CHRISTMAS and PILLOW TALK. Other favorites include WILL RODGERS FOLLIES, THE SCARLET PIMPERNEL and AIDA for which he was honored (as co-director with wife Tina) with a 2010 Column Award for Best Director of a (non-Equity) Musical. Being a Dad and husband is his favorite production however and as ever he sends love to Tina, Tabi, Parker, Cameron, Eden, Mimi and JJ.
More info

Jay may be best known in and around the Johnson and Hood County area as an actor, but he actually spent most of his life as an educator and sports official. He officiated football for over thirty years most of all of which was in Colorado at the high school level. He served on state and national committees and boards as an official and as an activities director. Now retired, Jay stays young by keeping up with the amazing theatrical talent of the southwest Metroplex. He last appeared on the Plaza stage – the term is used loosely considering how much audiences saw of him – as Uncle George in CASH ON DELIVERY and the Kralahome in THE KING AND I. He performed seven other shows in 2013 including 12 ANGRY MEN and 1776 with the newly revived Granbury Theatre Company. Jay is the author of two published novels, which are available online at crossoflorraine.com and litofangels.com. He lives in Cleburne with his lovely and supportive wife Corlis.
More info

Tammie is lovingly known around the community theater world as "Prop Momma" and she truly adores her job as properties manager here at Plaza Theatre Company. She is thrilled to work with such a wonderful production team! Tammie would like to thank her family and friends for supporting her and God for allowing her to use the creative gifts He has blessed her with. "To God be the Glory!"
More info

Julie Asher Lee was raised in the scenic woods and rolling hills of Missouri. She began painting, set work and scenic design for community theater in 2007. She taught art at Travis Academy in Fort Worth, before concentrating on oil painting. She specializes in scenic landscapes, wildlife, and western art. She currently serves as Artistic Advisor for the Chisholm Trail Museum in Cleburne. She is a member of Oil Painters of America, American Women Artists, and the Johnson County Art Guild. Her paintings can be seen in the Heartbeat Gallery and The Bare Wall Gallery in the United Kingdom, or by appointment here in the US. You can learn more at www.julieasherlee.com
More info