Man with the Pointed Toes 2006 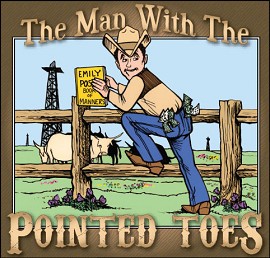 is a fantastic person to be helping us with our preview week. Here at Plaza Theater Company we have kept her so busy she was not even able to give us her bio. She has done it all from playing piano in SMOKE ON THE MOUNTAIN, performing in FORGOTTEN CAROLS, and costumes for EAT AND RUN, and many others shows.
More info

is pleased to make his stage debut in Cleburne. The fact that he has previously worked with everyone in the Toes cast makes the experience even more enjoyable. During his ten years of community theater activity, he has played a nerd (BYE BYE BIRDIE), a gang member (WEST SIDE STORY & GREASE), an FBI agent (GRAND OLD FLAG), a Nazi (SOUND OF MUSIC), a gambler (GUYS & DOLLS), a pirate apprentice (PIRATES OF PENZANCE), a King (AMAHL AND THE NIGHT VISITORS), a beggar, a tailor (FIDDLER ON THE ROOF), and a spy (THE SCARLET PIMPERNEL) but now David gets to play a role best suited for his personality, a "hick." He sends his love to his beautiful wife and daughter who continue to put up with his "hickish" ways (so, flannel isn't a good color for a couch?).
More info

Faith's passion for the arts led her to theater and she has never regretted it! A few of Faith's favorite roles are BIG RIVER, ANNIE, and SMOKE ON THE MOUNTAIN. She loves teching, promoting, and performing on stage! "I have been blessed to have met some amazing people along the way and hope to be lucky enough to work with them again! Thanks to my Father in Heaven for the gifts he has bestowed upon me and thanks to my Husband Daniel and my children Sydney and Sebastian for always supporting me in the Joy that is Theater!"
More info

is very excited to be a part of the first production at the Plaza Theater Company and his premier in Cleburne, TX! He has been in numerous productions in DFW and at other theaters in the US. Favorite roles include Pap in BIG RIVER, Lazar Wolf in THE FIDDLER ON THE ROOF, Big Julie in GUYS AND DOLLS, Levi in JOSEPH AND THE AMAZING TECHNICOLOR DREAMCOAT, and Odysseus in THE ODYSSEY. He is married to Milette and has three wonderful kids.
More info

This is JaceSon's third experience performing in THE MAN WITH THE POINTED TOES, in his third different role in the show (but secretly he always wanted to be Link). Other favorite roles include Harold Hill in THE MUSIC MAN, Ebenezer Scrooge in A CHRISTMAS CAROL and Adam Ponitipee in SEVEN BRIDES FOR SEVEN BROTHERS. His favorite productions however are kiddos Tabitha, Parker, Cameron, Eden and recent premiere, Miranda, who always keep him on his toes.
More info

has been acting locally in the DFW area for the past 5 years. For the last year he has had the wonderful opportunity to travel the country and the world with the Dallas Children's Theater National Touring Company performing "The Stinky Cheese Man and Other Fair(l)y (Stoopid) Tales". He recently returned from China performing the same show for an International Children's Expo. He is pleased to be back and working with one of his close theater families.
More info

is excited and grateful for the opportunity to work with the very talented cast involved with this debut production for the Plaza Theater Company. As a newcomer to the theater, she has performed at Artie's Playhouse in THE TORTOISE, THE HARE AND THE REALLY CLOSE SHAVE as well as stage managed for SMOKE ON THE MOUNTAIN. Karen would like to extend a huge thanks to her theater friends that she is blessed to work with and learn from.
More info

is pleased and honored to be helping debut the Plaza Theater Company. He has found in his theater experience there is nothing better than working with the Barruses and the Silers. He has worked with them in other productions such as BIG RIVER where he played The Duke, THE SCARLET PIMPERNEL where he played Dewhurst, and SEVEN BRIDES FOR SEVEN BROTHERS where he played Benjamin. Other credits include FATHER OF THE BRIDE (Buckley), SMOKE ON THE MOUNTAIN (Oglethorpe), BYE BYE BIRDIE (Conrad Birdie), and THE DEKS SET (Kenny). Thanks JaceSon, Tina, Aaron, and Milette for allowing me this wonderful opportunity!
More info

is really excited to be working with Tina and Jaceson again after working with them in numerous shows including SEVEN BRIDES FOR SEVEN BROTHERS, BIG RIVER, JOSEPH, and others. Marshelle's favorite productions include PRIDES CROSSING, THE HERBAL BED (Stage West), PINNOCHIO (Casa Manana), and THE MIRACLE WORKER (Theatre Arlington). Marshelle is a teachers aide at Birdville Elementary and would like to be a theatre teacher.
More info

has contributed to over 80 stage productions in the last 10 years as performer, choreographer, director, technician, and stage manager. She co-created, wrote, and performed for the Artie's Playhouse Interactive Children's Theater program at the Artisan Center Theater in Hurst, TX. In the past few years, she has been seen on stage as Sister Amnesia in NUNSENSE, Fruma Sarah in FIDDLER ON THE ROOF, Minnie Fay in HELLO DOLLY, and most recently as Kathy Selden in SINGIN’ IN THE RAIN, a show which she also choreographed. She is the proud owner/director of Song N Dance Performing Arts Studio and Up And Away! Interactive Theater For Children in Lewisville, TX. A big "Thank You" to God for allowing her to live out her dreams.
More info

is honored to be a part of the very first production of the Plaza Theater Company. Milette has been privileged to be a part of several local DFW theater productions, her favorites including: THE SCARLET PIMPERNEL, BIG RIVER, THE COMPLEAT WRKS OF WLLM SHKSPR. ABRIDGED, and THE SOUND OF MUSIC. Her favorite role however, is that of wife and mom to Dana, Ryan, and Mitch. "Big Hugs, guys!".
More info

is a graduate of Harding University with a BA in Theatre and an MA in Drama from Texas Woman's University. She currently serves as the Drama Teacher at Southwest Christian School in Fort Worth, TX. Stefanie has Acted, Directed and Stage Managed for several theatres over the past ten years and excited to be a part of this show with the Plaza Theatre Company. Some of her favorite shows are THE IMPORTANCE OF BEING EARNEST, SINGIN’ IN THE RAIN, JAKE’S WOMEN, and THE DINING ROOM. Stefanie thanks her family and friends for their love and support!
More info

is delighted to appear on stage in Cleburne. He enjoys live theatre and loves performing whenever the opportunity arises. Some of his favorite roles have been Matthew Cuthbert in ANNE OF GREEN GALBLES , Elwood P. Dowd in HARVEY, Cord Elam in OKLAHOMA, Samuel in PIRATES OF PENZANCE, and recently THE MILKADO. Tim’s day job is Training Manager at CAE SimuFlite where they train business jet pilots. He thanks his family for their support and for graciously allowing him to enjoy the stage.
More info

is best known for playing the blonde ingenue on stage like Lily St. Regis in ANNIE or Lena Lamont in SINGIN' IN THE RAIN, so she's excited about getting to play a smart blonde for a change. Other roles she's loved include Fairy Mae in THE CURIOUS SAVAGE and Bette in HEAVEN CAN WAIT. Her favorite role though is as her kids Mom and she sends love to T, P, C, E and little M.
More info

is incredibly happy to be apart of this production. She has most recently been performing at Artisan Center Theatre in Hurst, TX in SCROOGE, ANNIE, BIG RIVER, and many others. She was an original cast member of CINDERELLA and LITTLE RED RIDING BOOTS. Additionally she has played at many other local theaters including CATS, Casa Manana, Theater Arlington, and Circle Theater. Currently Treva is attending TCC on a theatre scholarship. Treeva and her sister Marshelle thank her Mom and Dad for driving them to all their rehearsals and performances.
More info